SASKATOON -- The second presumptive COVID-19 case in Saskatchewan was confirmed after a test was conducted in Saskatoon on March 10.

A man in his 60s had traveled from Oregon in the U.S. and was deemed well enough to self-isolate at home, according to the province.

"(He) arrived in Saskatoon March 10, and was not feeling well and self-isolated at home," Chief Medical Health Officer Dr. Saqib Shahab said during a news conference Friday afternoon.

Because the man immediately took steps to self-isolate, Shahab said his contact with others was limited.

"Public health is currently interviewing and following up with all contacts who need to be aware who need to self-monitor or self-isolate following their exposure," Shahab said.

Friday afternoon, the Saskatchewan Health Authority (SHA) said it has opened a COVID-19 testing centre in the city, a referral is required.

People who may have been exposed to the virus or show mild symptoms can obtain a referral from a family doctor, by calling the province's 811 health line or contacting their local communicable disease control office.

Common signs of COVID-19 include include fever, cough, shortness of breath and breathing difficulties, according to the SHA.

A testing centre was also opened in Regina on Friday and a Prince Albert location is slated to open Monday, the SHA said.

Late Friday afternoon, the University of Saskatchewan announced classes would be temporarily suspended starting Monday and all courses will shift to remote instruction by later in the week.

On Thursday, it was announced that a Saskatoon man, aged 60, who recently returned from a trip to Egypt was Saskatchewan's first presumptive case of the illness.

The man only had interaction with one another person, and the contact occurred in his home, Shahab said on Thursday. The person the man had contact with was being monitored as a result.

In an interview with CTV News Friday morning, Saskatoon Mayor Charlie Clark said the city has been preparing for the potential spread COVID-19 and encouraged people in the city to continue to stay engaged in daily life.

"We want you still to go out and support local businesses, go out and be in the community and do it with care and precaution," Clark said, reiterating the message of health officials that hand washing, coughing into your sleeve and staying home when sick are the best ways to prevent the spread of the illness.

"I think it's important right now we don't just think about how we protect ourselves, but how do we make sure our neighbours are okay."

Also in Saskatoon on Friday, the leader of Saskatchewan's opposition — who is a family physician — called on the province to take further steps he believes would help prevent the spread of COVID-19.

"We're in a very good position to act quickly, we are still at the beginning of this and is our opportunity to get ahead of the coronavirus epidemic in our province," NDP leader Ryan Meili said during a news conference.

Meili focused on several specific measures he feels the provincial government should take, including a public inventory of "key equipment" such as ventilators and oxygen machines to help treat acute cases of the illness.

Around the same time as the Meili's news conference Friday morning, long lines of shoppers snaked their way through the city's Real Canadian Superstore location on Eighth Street East as shoppers stocked up on items. 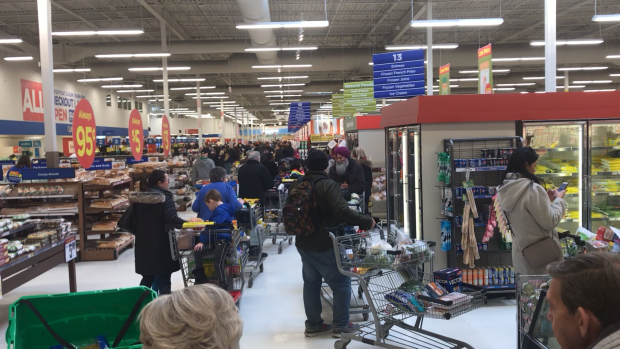 "I came just to grab some milk, cheese eggs," Wanda Herbel said after a long wait to pay for her groceries.

"The line was wrapped all the way around to the back, and people didn’t know whether they should be coming around beside that line. Nobody knew, it was just chaos."

Herbel said for the most part, shoppers were well-behaved despite the long waits.

Across town, the Friendship Inn said it would be making changes to the way it offers free lunches and dinners to people in need in response to concerns about COVID-19.

In the post the organization requests donations of items more suited to a bagged lunch or dinner, like cheese slices, sliced bread, whole fruit and bottled water.

In the wake of the arrival of COVID-19 in the province, the Federation of Sovereign Indigenous Nations (FSIN) called a news conference morning as well.

The FSIN chiefs gathered at the organization's Saskatoon headquarters said the federal government needs to do more to help their communities prepare for the possible arrival of the highly-contagious illness.

"It would be disastrous," FSIN Vice-Chief Heather Bear told reporters.

“We’re looking at communities that are so close-knit and they gather continuously."

The leaders called on the federal government to provide more sanitization supplies and COVID-19 tests to remote communities.

Also, on Friday the scope of the COVID-19-related cancellation of the Juno Awards, set to happen in the city over the weekend, came further into focus.

Tourism Saskatoon's vice president estimates the loss to the local economy could be in the neighbourhood of $9 million.

"We're just starting to understand what that looks like and have really no concept of the mass impact that it will have," Stephanie Clovechok told CTV News.