﻿'I got a sword above my headboard in case I need it': How some describe life inside a Saskatoon condo building

SASKATOON -- Isaias Ruiz bought his unit at Prairie Heights a month and a half ago.

He hoped to move in with his pregnant wife and brother, but after seeing the conditions inside, he feels that’s no longer an option.

“This is like a time bomb. It’s going to explode very soon,” he told CTV News, describing the condo building located in the city’s Pleasant Hill neighbourhood.

“I feel very sad and I honestly even want to cry because it’s not fair.”

Now Ruiz is in the process of renovating his unit so that he can sell it.

He said people squat in the hallways, use drugs, treat the stairwells like a bathroom and cause property damage. 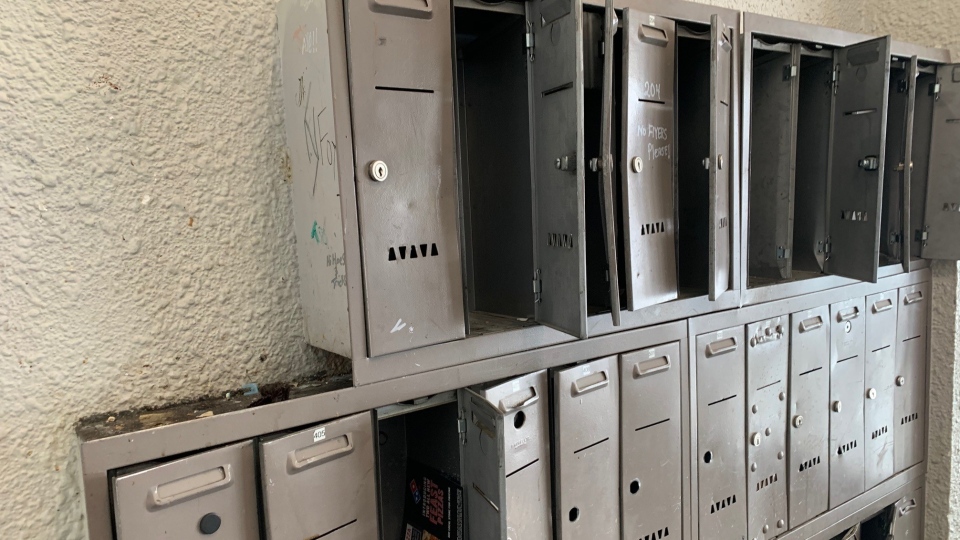 The building at 1416 20th Street West is well-known to both Saskatoon firefighters and police.

Officers were dispatched to the building 410 times last year according to Saskatoon Police Service, while firefighters went 91 times.

The Saskatoon Fire Department said there are pending charges related to the building’s sprinkler system and other “deficiencies.”

The sprinkler system flooded the building last week after it was triggered by a fire lit in a stairwell.

“There was flooding, needles were floating inside the elevator box. They didn’t want to go in there so a biohazard company had to come in here to pick it up. It is crazy,” Ruiz said. 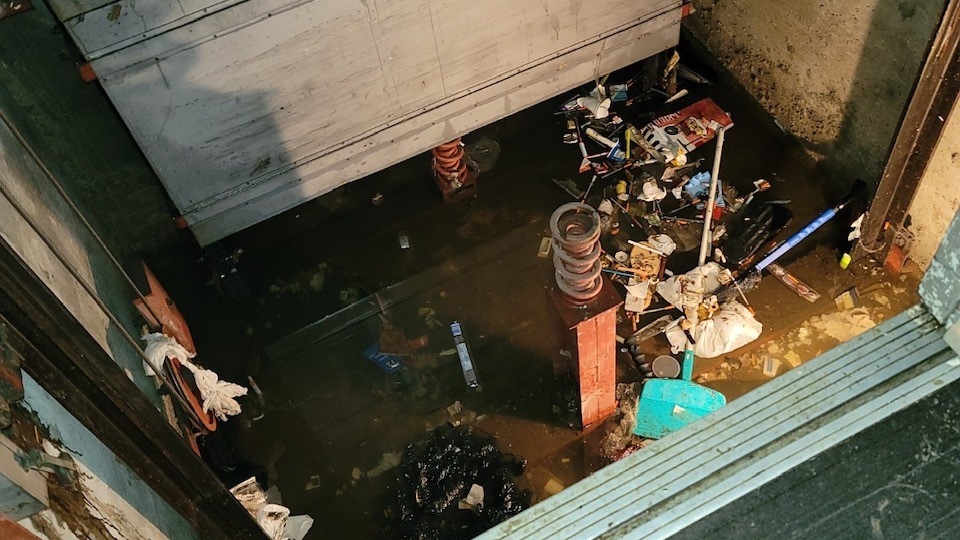 Another owner who lives in the building has added extra locks on his door and said he feels the need to keep weapons close by.

He didn’t want to be identified because he fears for his safety.

“I altered my lock from the outside so they can’t use a screwdriver to get in. And then I got a baseball bat,” he said.

“In the evening, I got a sword above my headboard in case I need it. I’m going to protect myself in case somebody breaks in.”

The man said he doesn’t park his car near the building, fearing it will be vandalized. Instead, he parks it on the street.

But he said that also comes with risks because he’s witnessed people tossing large items off their balconies. 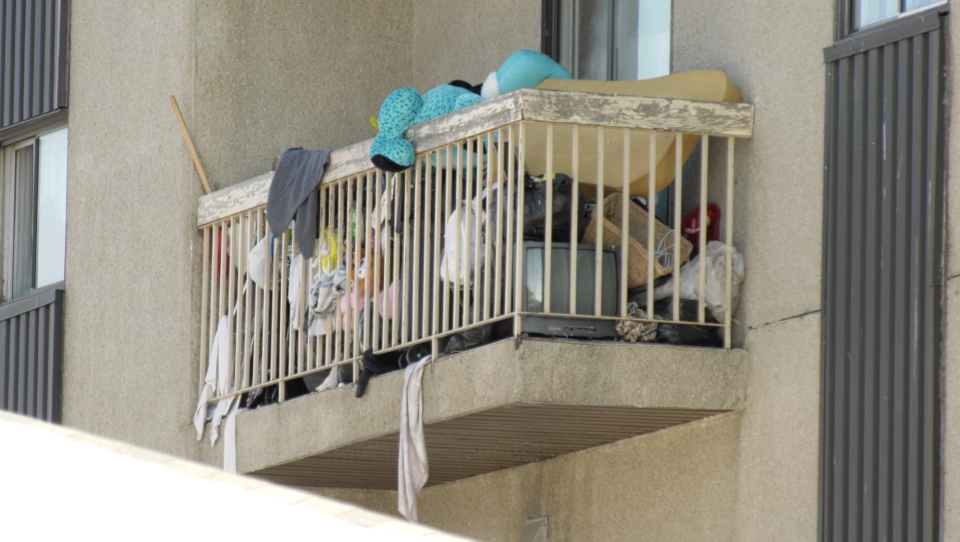 “They toss furniture off. Oh yeah, that’s nothing new. They even go to the bathroom off the balcony. That’s not rain outside, that’s for sure,” he said.

The man said he spent his life savings on his unit and now feels stuck because he won’t be able to sell for as much as he bought it for.

He told CTV News owning a unit in the building seemed like “pushing a boulder uphill.”

Wilkie said it felt like no matter how much effort he put into the building, even serving as president of the condo board, nothing seemed to get better.

“So I decided, just get out because it could get worse, right? I could end up with zero,” he said.

The board is currently in disarray according to Wilkie, with no one left willing to serve on it. He said the board is in the process of finding a trustee to take over.

Wilkie and Ruiz both believe the problems in the building are caused by landlords who own multiple units and are renting them without proper screening.

Larry Bozek owns 14 units in the building, renting them out to tenants.

“Those people in there got to live someplace. I mean if we try to throw them out of that area, it’s just going to move, we’re going to move them to a different area, So, I mean let’s try to work with these people,” Bozek told CTV News. 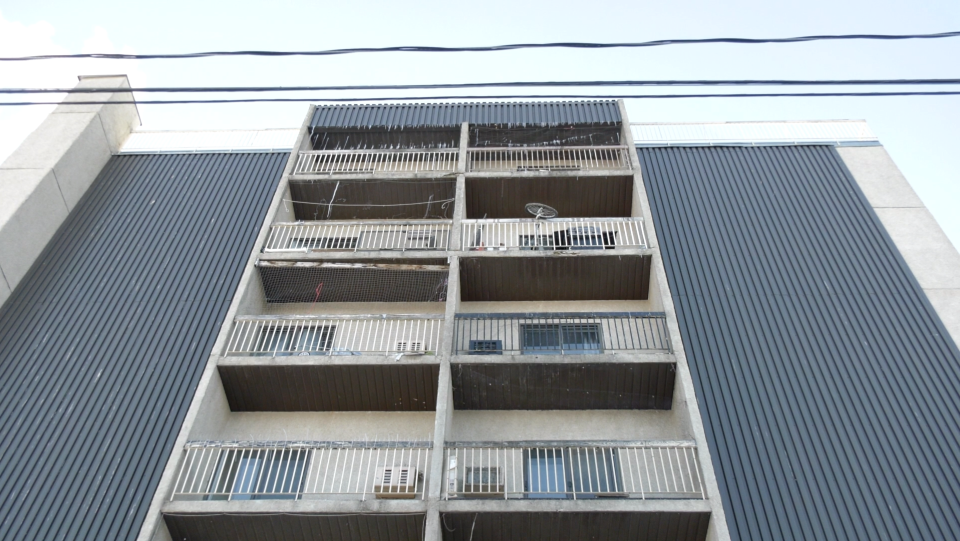 Faith Eagle, a director at the Pleasant Hill Community Association, said the underlying issues are addictions and mental health.

“This is the hood, this is Pleasant Hill. This is where addictions run rapid,” she said.

Ruiz also wants those people to get the help they need and hopes the building can get turned around for the better.

He is calling on city officials to help get things under control in the building.

“We’re human beings, we can help each other here,” Ruiz said.

According to the City of Saskatoon, while fire department officers can temporally close a building for the purpose of conducting an inspection, only the Fire Chief can close a building if he is of the opinion there is an imminent threat to public health or safety.

The department exercised these powers last summer when it ordered the closure of City Centre Inn and Suites.

The downtown motel had many long-term residents and was a known hotspot for police.

Dozens of outreach workers from at least 10 agencies and organizations were called in to assist residents displaced in the closure.