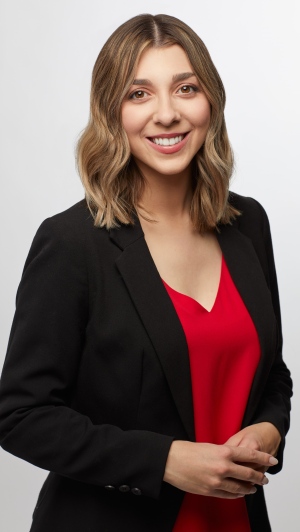 Nicole Di Donato is the weekend anchor and a video journalist at CTV Saskatoon. Growing up, Nicole never shied away from the camera or from an opportunity to ask questions. It's that curiosity that led her to pursue a career in broadcast journalism. Nicole's favourite part about the job is getting to connect with people in the community, telling their stories and learning new things as a result.

During her time at CTV Saskatoon, Nicole has done extensive coverage of Saskatchewan's healthcare system and the challenges it has faced with capacity and surgical backlogs due to the COVID-19 pandemic. She has also reported on the city's housing issues, delving into how it intersects with addictions and mental health. One example is her months-long coverage of a problem-plagued condo building where residents reported open drug use in the building, gang violence, as well as other health, safety, and fire hazards. Coming from a family of entrepreneurs, Nicole also have a keen interest in telling consumer and business-related stories.

Before landing in Saskatchewan's largest city, Nicole worked as a video journalist at the CTV Northern Ontario bureau in Sault Ste. Marie. Nicole has a Bachelor of Journalism from Toronto Metropolitan University, formerly known as Ryerson University. She also completed an eight-week intensive filmmaking workshop at the New York Film Academy in Los Angeles, California in the summer of 2018. There, she got experience directing, writing, casting and shooting her own original films.

When she isn't working, Nicole enjoys spending time with family and friends, travelling and drinking lots of cappuccinos.