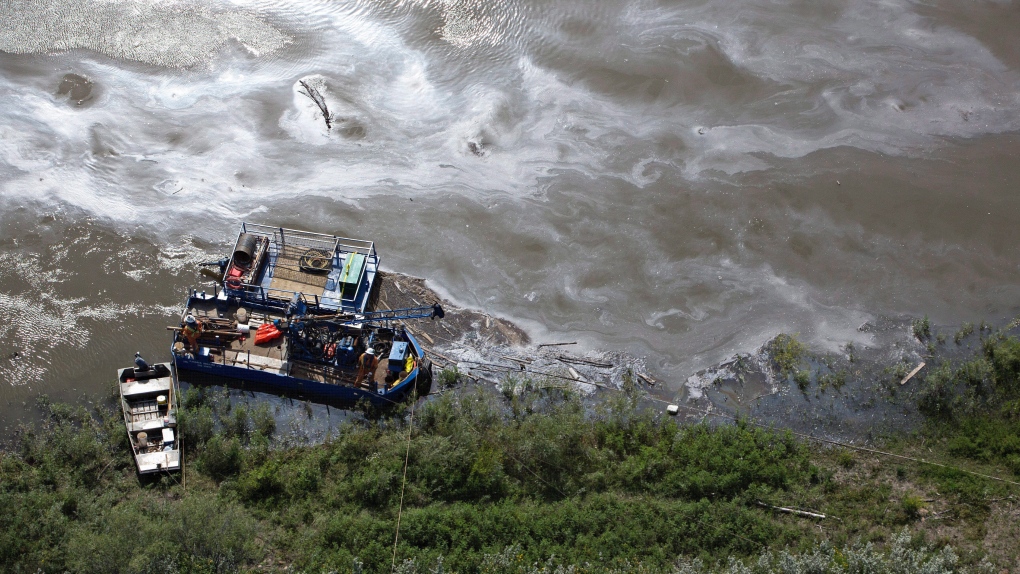 Crews work to clean up an oil spill on the North Saskatchewan river near Maidstone, Sask on Friday July 22, 2016. Husky Energy has said between 200,000 and 250,000 litres of crude oil and other material leaked into the river on Thursday from its pipeline. (THE CANADIAN PRESS / Jason Franson)

Husky Energy has pleaded guilty in a pipeline leak that sent oil spilling into a major river that is the source of drinking water for a number of Saskatchewan communities.

The spill into the North Saskatchewan River in July 2016 forced the cities of North Battleford, Prince Albert and Melfort to shut off their water intakes for almost two months.

Several other charges were withdrawn by the Crown.

The provincial Crown is seeking a total fine of $1.12 million.

About 40 per cent of 225,000 litres of diluted heavy oil from Husky's pipeline near Maidstone in west-central Saskatchewan made it into the river.

It caused an oil plume that flowed hundreds of kilometres downstream.

The charges were announced in May 2018 after a 19-month joint federal-provincial investigation.

Husky had already apologized for the spill and said it accepted full responsibility.

The pipeline was allowed to restart in October 2016 after being repaired and inspected. The company has said the pipeline buckled and leaked because of ground movement.

The company pegged the cleanup cost at more than $107 million.

Melfort Mayor Rick Lang told CTV News he is pleased with how Husky handled the spill, adding the company took care of all financial costs related to the incident.

As for the environmental charges, Lang said they’re hard to deny but Husky didn’t hesitate to take full responsibility.

"They acknowledged that there was a problem in the system and that they were responsible,” Lang said.