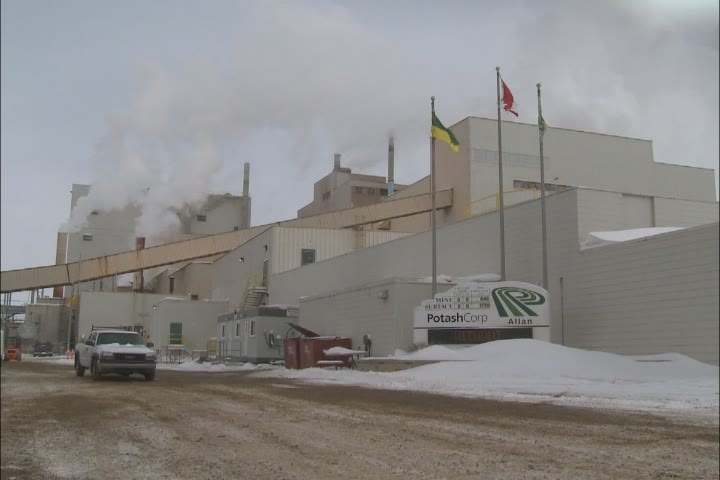 PotashCorp chairman Dallas Howe says in a letter to Premier Brad Wall that the amount of the company's dividend would not change the number of job cuts.

Premier Brad Wall has sent a letter to Potash Corp. of Saskatchewan executives blasting them for cutting jobs while preserving the dividend paid to shareholders.

The Saskatoon-based company said Tuesday that it is laying off 1,045 people to reduce its workforce by about 18 per cent, with the biggest hits in its home province of Saskatchewan.

Wall is upset because PotashCorp CEO Bill Doyle said the fertilizer company's dividend is "sacrosanct" and won't be touched.

"This can only mean that the interests of shareholders were protected while the interests of employees here in Saskatchewan and elsewhere were sacrificed," Wall wrote in the letter dated Dec. 4.

About 440 people will lose their jobs in Saskatchewan. Most of those positions are at PotashCorp's Lanigan division, where one of two mills is to suspend production by the end of the year, and at its Cory division where production will be reduced. Cuts will also be made at the Saskatoon headquarters.

About 130 people in New Brunswick also will be out of a job. The rest of the cuts are to occur outside Canada, including more than 435 in the United States.

But in a three-page letter to Wall dated Thursday, PotashCorp chairman Dallas Howe says the amount of the dividend would not change the number of job cuts.

"If we reduced our dividend to zero, we still need to right-size our operations in order to protect the long-term sustainability of our company -- and all of the remaining jobs," he wrote.

"For the company to make that announcement that they made and then for Mr. Doyle to indicate that the dividend policy is unchanged and 'sacrosanct,' that causes me great concern," the premier said Thursday.

"All the stakeholders in the company, should share in the down times -- not just workers, not just sub-contractors, but shareholders."

In the letter to Howe, Wall asks the company to revisit its dividend policy and Tuesday's decision "with a view to considering whether the number of layoffs could be mitigated."

"Mr. Doyle has his shareholders. I have mine and they're the people of the province, who ... own the potash in the first place."

Howe wrote that the board of the corporation "wholeheartedly" agrees that everyone should share in the bad times as well as the good, and said shareholders have shared the burden in the 35 per cent drop in share values in recent weeks.

"I would also point out that our shareholders include our employees, our retirees, our Saskatchewan friends and neighbours and many other individuals who have invested in our stock directly or through large institutional retirement and mutual funds," Howe wrote.

"I want to be clear that the dividend is not sacrosanct ... if the board felt that the dividend should be adjusted downward or eliminated, it would do so. However, even the total elimination of the dividend would have no influence on how many employees it takes to efficiently run our operation."

Howe said the board thinks it's important to regularly return cash to investors.

"Our shareholders provide us the capital to run and grow our business -- enabling the benefits that flow to our employees, communities and other stakeholders. Dividends are a reasonable expectation on their part."

Howe also pointed out that PotashCorp has invested nearly $6 billion in Saskatchewan to expand its potash operations.

"These capital expenditures will continue as we complete all of our planned expansions during the next two years because we remain resolute in our belief that this additional capacity will be needed in the future."

Potash is mined and used primarily as an ingredient in fertilizer. Saskatchewan is the largest producer in the world, accounting for approximately 30 per cent of total production. The province has almost half of the globe's potash reserves.

Wall has been one of PotashCorp's biggest defenders. In 2010, he helped lead opposition to a takeover attempt by BHP Billiton.

Wall vehemently opposed the deal on the grounds that Saskatchewan could lose billions in revenue from taxes and royalties. The premier painted the proposed takeover as anti-Canadian and said the country's strategic interests would be at risk if the province sold most of its potash industry to an international company.

Ottawa ultimately rejected the takeover after concluding it failed to benefit Canada.