STANLEY MISSION, SASK. -- The RCMP in Saskatchewan is reviewing the behaviour of an officer captured on video yelling, swearing and carrying an axe into a home where a man inside had self-harmed.

Jonas Hardlotte lives in Stanley Mission, about 450 kilometres north of Saskatoon, and posted the one-minute video to Facebook.

The 33-year-old Cree man says he was experiencing depression and was speaking to his mother-in-law, who called the local clinic to check on him.

RCMP spokesman Cpl. Rob King said in a statement that police received a request for help from the clinic just before noon Tuesday after staff received a 911 call about a man who had injured himself.

King said an officer and two nurses arrived at a home and the officer could see through a window that a man was bleeding, so the Mountie attempted to get inside.

Hardlotte says the officer acted rudely and he felt intimidated, so no one inside opened the door and instead used his phone to start recording.

"I thought I did something wrong," he said of the officer's behaviour.

In the video posted to Facebook, an officer using profanities can be heard telling Hardlotte's cousin, who is standing by a window, to open the door.

It appears that the officer hits the window hard three times with his fist and yells: "Open the door now."

"The (expletive) clinic is here to check on you. Open the door or I'm coming back with a sledgehammer," the officer is heard saying.

The video shows the officer walking away. That's when Hardlotte's cousin opens the door. The officer can be seen returning and walking through it with an axe in hand.

"You think I was kidding," he says before entering the home, followed by two nurses.

King said RCMP are aware the officer took away Hardlotte's cellphone and stopped the recording.

"He had no right to do that," said Hardlotte.

The social media footage was brought to the attention of the police Tuesday afternoon, said King, and the RCMP is doing a full review of what happened.

The officer involved has been reassigned, he said.

"Transparency and accountability are critical in our role as the provincial police service," King said in the statement.

"The Saskatchewan RCMP extends sincere appreciation to the members of the public for bringing this video to our attention."

'I’ve been going through a hard time'

Hardlotte told CTV News he is glad the RCMP is taking the incident seriously and is being accountable for the officer’s actions.

Hardlotte also talked about the difficulties he and many others are dealing with in getting the help they need in a timely manner in northern Saskatchewan. 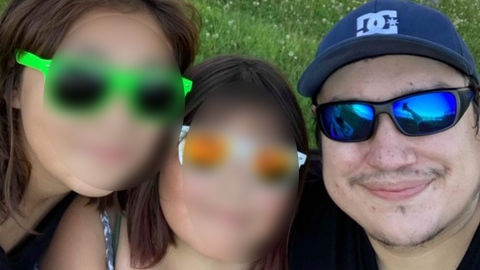 “They came to do a follow up with me today, two days later. I don’t know any of those mental health therapists and the therapists I used to work with are from La Ronge but they all moved away. I used to go to detox when I was going through hard times and the detox is closed in La Ronge because of the COVID-19 pandemic. When this incident happened, the other nurse who was not from this area was also not being nice to me just like the RCMP officer.”

Hardlotte said he has had difficulties in seeing his kids, he lost his job as a security guard, his family have been distant because of his addictions and he lost his father in 2016.

“I’m still dealing with that mentally, it’s just a bunch of stuff built up. I’m not afraid to admit I’m going through depression, anxiety and addictions. I’ve been going through a hard time.”

A news release from Lac La Ronge Indian Band said members, including a representative from the Federation of Sovereign Indigenous Nations, met with senior RCMP staff regarding the incident.

“We are very disappointed by this officer’s response to a health and wellness check on one of members from Stanley Mission,” Chief Tammy Cook-Searson said in the release.

“The RCMP’s response was frightening and inappropriate, especially toward a member of our community believed to be in duress. We had a meeting with senior RMCP officers to address the the concerns raised by community members and on social media with regard to the video released.

“We are satisfied with the RCMP’s plan to order an investigation. In the meantime, the officer will be reassigned effective immediately, and an RCMP supervisor will be assigned in the interim until a new officer arrives in mid-September. Into the near future, we will continue to meet with the RCMP on how they will better respond to these types of situations.”

“How dare an RCMP officer behave in that intimidating, bullying and harassing manner. That’s what he was doing. Whoever that officer is should be fired, he should be terminated. How dare you come in and make threats that you’re going to come in with a sledgehammer and you walk in with an axe all full of anger.”

He said policing must be done better and that protocol and respect must be followed at all times.

This report by The Canadian Press was first published Aug. 26, 2020