'I will never forget Hugo': Saskatoon artist, philanthropist passes away at 71 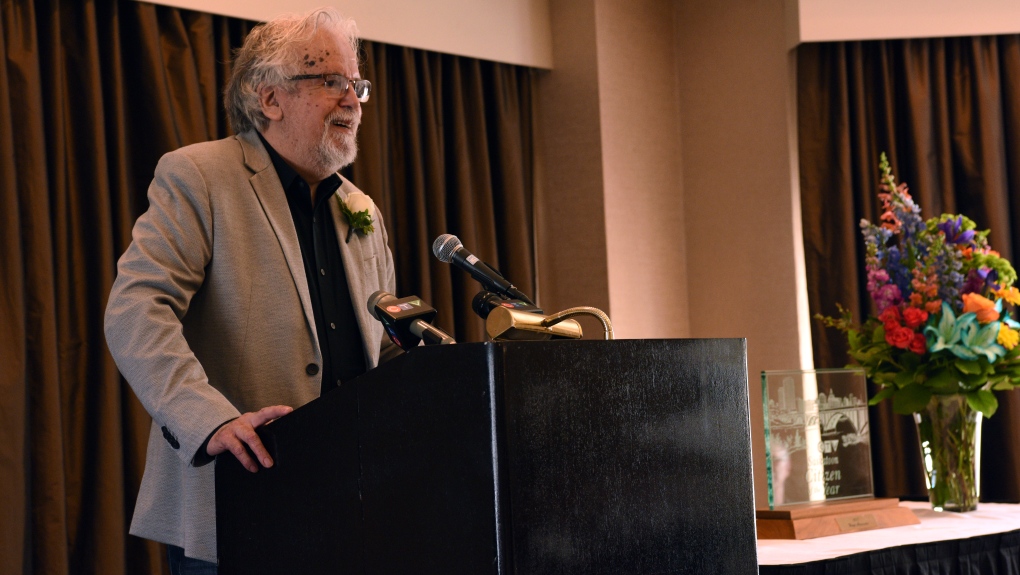 Hugo Alvarado accepts the 2017 Saskatoon Citizen of the Year Award from CTV Saskatoon at a luncheon Thursday, March 29, 2018.

SASKATOON -- Remembered for his generosity to the community and his love and passion for art, Hugo Alvarado, 71, died on Saturday.

His daughter Raquel Alvarado posted on Facbook Saturday night in memory of her father.

Alongside her sister Paloma, Raquel told CTV News Saskatoon her father was rarely seen without a brush in his hand, and he loved to share his work with everyone around him.

“You put a paintbrush in front of him and it’s like the world went away, he was happy to be doing that,” she said. “He loved working with vibrant colours and abstracts. He’s well-known for his cityscapes but he also does a lot of landscape work, painting the Saskatchewan prairies.”

Alvarado’s family said Hugo suffered from pulmonary fibrosis and he was awaiting a lung transplant at the University of Alberta Hospital in Edmonton.

Even while in hospital, his daughters said he set up a studio in his hospital room and handed out many of his paintings to hospital staff.

“Anytime one of his favourite nurses or doctors walked in, he would give them a painting. He just loved sharing his art with people,” Raquel said.

Alvarado was named CTV News Saskatoon's Citizen of the Year in 2017.

Alvarado co-founded Artists Against Hunger (AAH), a group of artists who organize auction fundraisers. Over its 25 years, the AAH has helped several local organizations including the Saskatoon Food Bank and Learning Centre, the Friendship Inn and CHEP Good Food.

“It’s my duty and it’s an honour,” Alvarado said at the Citizen of the Year luncheon in 2018.

Alvarado donated his artwork to various organizations across Saskatoon. He donated art supplies to school children.

Alvarado arrived in Saskatoon in 1976 after being politically exiled from Chile. He told CTV Saskatoon he arrived knowing no English, with just five dollars and a pair of shorts in a bag.

In 2018, he recalled a police officer helping him shortly after he arrived in Saskatoon. He said he was lost and attempted to stay warm in a bus shelter in the middle of winter.

Alvarado said the city welcomed him with warmth.

“I will never forget when I came. I also (had) nothing. When I see people on the street, hungry or single mothers suffering, I just think, ‘I was there,’” he said. “I realized the people were very good to me. They treated me like a friend. They open their hearts and their homes, so this became my home.”

Longtime friend of Alvarado, Don Greer, told CTV he met Alvarado at an art auction and they’ve been friends ever since. Known for his winter sculptures, Greer said he’ll always remember Alvarado’s art and his dedication to Saskatoon.

“His hard work, his colour, his enthusiasm to help,” Greer said. “His willingness to share and to give, Hugo was a man of this community.”

Emotional upon learning about the passing of his close friend, Greer said the impact Alvarado had on his family and everyone he worked with will not be forgotten.

“I will never forget Hugo.”