'I had a jolt of adrenaline': Video shows Sask. man fending off bear with spray

'I had a jolt of adrenaline': Video shows Sask. man fending off bear with spray

A Saskatchewan photographer had a tense encounter with a bear in Prince Albert National Park and captured the whole thing on video.

"My heart rate was up; I had a jolt of adrenaline. I was hyper-focused in this situation, laser-focused," Curtis Matwishyn told CTV News.

Matwishyn happened upon the bear near the Waskesiu townsite in the park.

"You don’t really know how you’re going to react until you’re in a situation like that," Matwishyn said.

While he didn't take the situation lightly, due to the wilderness training he received for his day job as a firefighter in the park, Matwishyn felt comfortable enough to try and document the experience.

Matwishyn held his phone in his left hand while holding a canister of bear spray in his right — ready to pull the trigger.

In the video, which can be viewed in the player above, Matwishyn can be heard sternly talking to the bear, calm at times and more assertive at other times.

As Matwishyn slowly backs away from the bear, it continues to edge closer.

His fiance waited in their vehicle just 400 metres away according to Matwishyn, unaware of the situation.

“In that moment I was just focused. You're not thinking about the future or the past or anything. You're hyper-focused on what's in front of you and also what's behind you so you don't trip as you are walking backwards,” he said.

At one point in the video, the bear scampers up a tree, Matwishyn saying "That's a good bear, you stay up there."

"I was trying to get it to climb further up the tree because in my experience, a bear that climbs up a tree they usually do that because they're spooked," Matwishyn said.

He began to suspect the bear may have been habituated to humans and started to feel the situation was more volatile.

Walking backwards through thick ground cover was also a concern for Matwishyn, knowing that if he tripped, things could escalate quickly.

“If I had fallen, the bear could have taken that as a panic or that would have been time and opportune time for it to approach me.“ 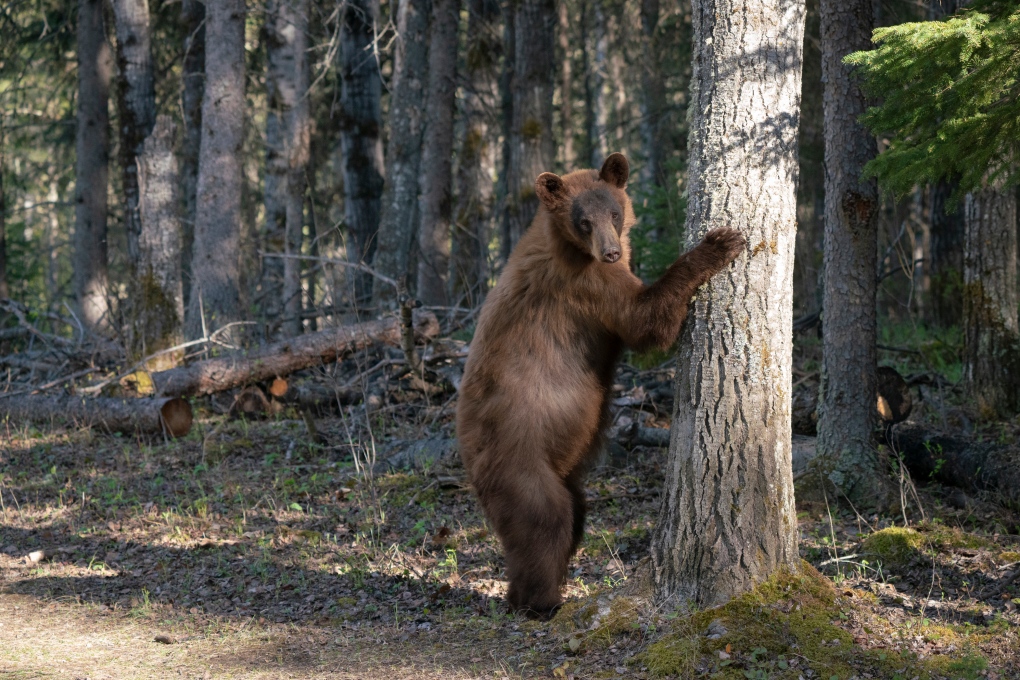 Matwishyn said even as the risk had ratcheted up, he still held off on using his can of bear spray until the wind was at his back to keep it from blowing back in his face.

"I think there is a moment you can tell in that video right before I spray it," Matwishyn said.

"The bear looks at me and it looks like it's going to start approach to me directly. So that's when I did give that spray."

If he was to do it again, Matwishyn said he’d spray the bear sooner.

He’s thankful the spray worked as intended and recommends anyone heading to the woods, to have it on hand.

Matwishyn said he'll never be certain whether it was going to charge or not.

"Thankfully I didn't have to find out."

Douglas Clark is a University of Saskatchewan researcher who is studying bear and human conflict and estimates the bear in this video is a "teen" between the ages of three and four.

“That video really gets my attention because that bear is not indifferent to what he’s doing, in fact, it’s approaching,” Clark told CTV News.

Clark has worked as a warden in national parks and thinks the video will serve as a good studying tool.

“It’s approaching like it hasn’t totally figured out what it wants to do. That is not flat out, I’m going to eat you for lunch, that’s not what that bear is doing, but it’s not stopping." he said.

"The climbing up a tree is interesting too because for black bears, that’s an escape response."

Clark said it seems more like the bear doesn’t know how to interact with humans in this context.

However, he said that doesn’t mean the bear isn’t used to human food and could possibly be accustomed to human interaction.

Clark said Matwishyn did everything correctly in this scenario and while there are many suggestions or guidelines on what to do, every encounter is different and each needs to be assessed on the spot to have the best safety outcome.

Matwishyn did all the right things according to Clark because he stayed calm, kept his options open and acted in a very deliberate and skilled way.