SASKATOON -- Along with much of central and southern Saskatchewan, a blizzard warning was issued for the city as a powerful winter storm system arrived, carrying roaring winds and blowing snow into the Saskatoon area Wednesday night.

Around 7 p.m., Saskatchewan RCMP advised there could be delays of police and emergency services for motorists due to "extremely poor" road conditions, particularly near Kindersley and Rosetown.

The province also recommended against highway travel to and from the city, and throughout much of Saskatchewan. Highways surrounding Rosetown and Kindersley were completely closed.

Power outages were reported widely throughout the city and surrounding area Wednesday night with no estimated time of when service might be restored.

Prior to the blizzard warning, the city spent Wednesday under an Environment and Climate Change Canada-issued wind warning with strong west to northwest winds forecasted for later in the day, potentially gusting up to 110 km/h.

By Wednesday afternoon, a snow squall watch was also issued for the city, meaning there could be periods of near-zero visibility due to blowing snow.

The storm was the result of a low pressure "clipper" system that made its way into Saskatchewan from Alberta. The unwieldy mix of wind and precipitation made for treacherous driving conditions.

“If you combine that with blowing snow, and the freezing rain, and the road starting to freeze up once the temperatures drop below zero, you've got yourself a real mess," Environment and Climate Change Canada meteorologist Terri Lang said.

Lang said up to 20 cm of snow could fall in parts of the province, with 5-8 cm possible in Saskatoon, though it will be hard to measure with high winds on Wednesday evening and overnight.

“The winds are still going to stay quite high, and with all that fresh snow that will have fallen, I think we're going to have a lot of issues with blowing snow reducing visibility and some really messy highways.”

During a virtual news conference Wednesday afternoon, the City of Saskatoon's emergency planning manager said the amount of damage the potentially fierce wind gusts may cause will depend on how long they last.

"It depends on how many gusts we get, and how sustained they are. So if it gets up to 110 km/h but it's a very short duration that's a different impact than if it gusts up to 110 and it lasts for a longer duration," Pamela Goulden-McLeod said.

During the media availability, Goulden-McLeod encouraged city residents to anchor loose objects such as patio furniture to keep them from getting picked up by the wind and possibly causing injury.

The city got its first taste of the weather system Wednesday morning after a brief dump of freezing rain left streets icy.

Saskatoon Police Service said it responded to "multiple collisions" after the rain started to fall due to "deteriorating road conditions."

The crashes were at College Drive and McOrmond Drive, Central Avenue and Fedoruk Drive, and Circle Drive and Clarence Avenue, according to police. No serious injuries had been reported.

After the freezing rain started to fall, the province's Ministry of Highways began discouraging travel on Highways 16, 11 and 7, although a midday thaw and the efforts of road crews made roads passable for much of the afternoon. 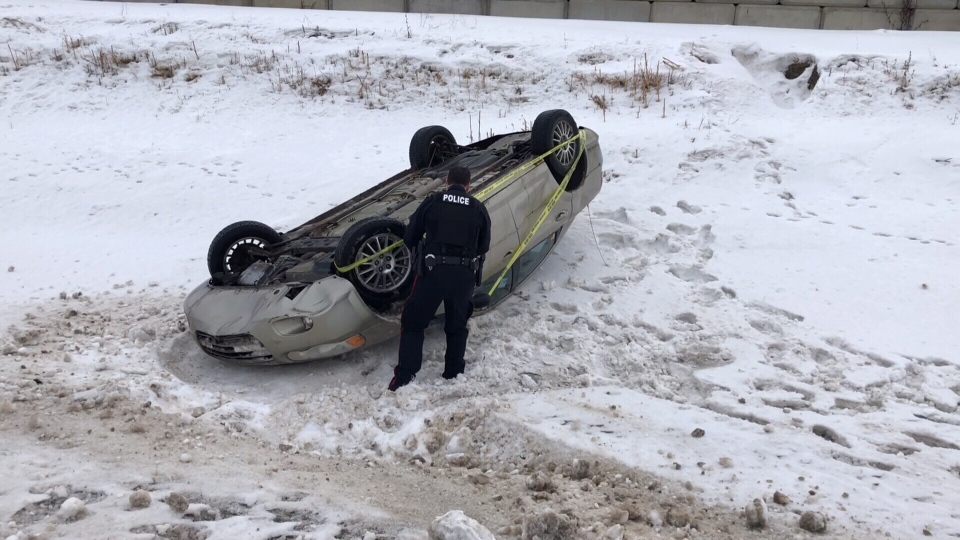 The time for Astro Towing’s workers to reach customers in the morning rose to about an hour – even with 30 trucks on the road, said Trent Kavanagh.

He said the phone began ringing "just constantly" shortly after 10:30.

"We had vehicles hitting the ditch and on the highways just about every highway in Saskatoon, all the city side streets lots of collisions and accidents on the side roads, anything that had a little skip of snow on it and that rain landed on it, it just turned into pure ice," Kavanagh said.

During the city's update on its preparations, Goran Saric, head of Saskatoon's roadways division, said crews had been out in force throughout the afternoon, applying a salt and sand mixture to help prevent ice from refreezing after a midday melt.

And the city's Urban Forestry workers could also have a busy few days ahead if the strong winds lead to fallen branches, which the city says should be reported promptly so they can be dealt with.

By late Wednesday morning, over two dozen warnings related to the system had been issued by Environment Canada for communities throughout Saskatchewan.

The weather agency said the strong winds will "subside below warning criteria" by Thursday morning but will still remain main "blustery."