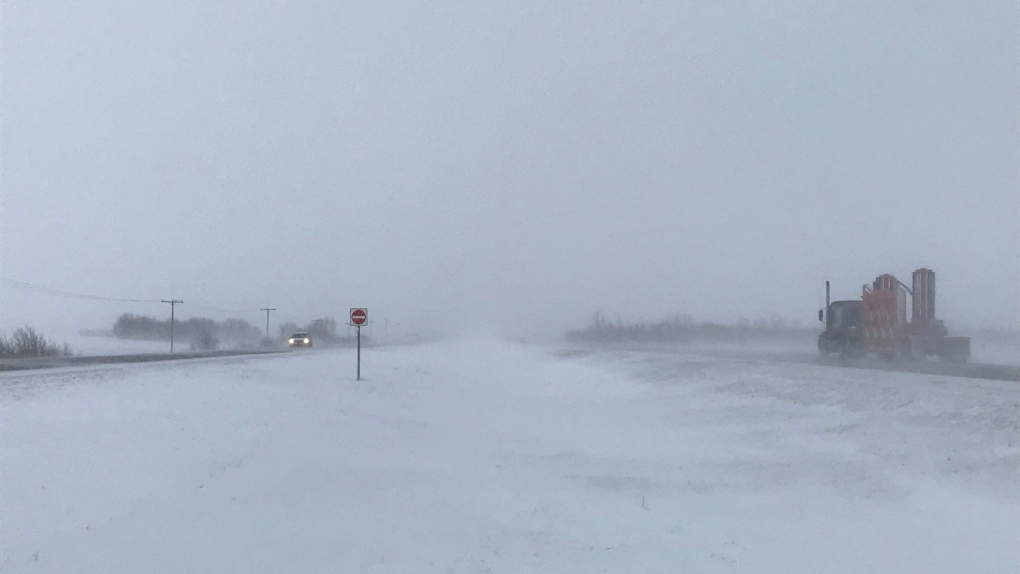 Snow blows across both lanes of a highway near Saskatoon on Tuesday, Jan. 30, 2018. (Albert Delitala/CTV Saskatoon)

SASAKTOON -- Environment and Climate Change Canada has issued a special weather statement for Saskatoon, with forecasters warning of a weather system that could carry fierce winds and blowing snow into the city on Wednesday.

A low-pressure "clipper" system is expected to cross into Saskatchewan with strong winds, arriving in the southwest Wednesday morning and expanding eastward throughout the day, the agency said in its statement.

"Widespread strong winds" of 60 gusting to 80 km/h are expected with gusts of up to 100 km/h possible. The most severe winds may come Wednesday afternoon, according to the agency.

"In addition, a mix of scattered rain showers, potential freezing rain, and finally some snow will accompany the system," the statement said.

"With the strong winds ongoing across the south, visibilities will be reduced at times due to snow and blowing snow."

The City of Saskatoon said in a news release it is preparing to adjust its winter maintenance operations in response to the storm.

Should the clipper arrive in Saskatoon, road crews will respond as follows:

The city says residents should stay off the roads in poor conditions.

They should also be prepared for icy roads, snow accumulation and reduced visibility, and to keep an eye out for snow equipment, the city says.

The wind and snow is expected to taper off late Thursday as the system leaves the prairies.

There were a total of 24 special weather statements issued on Tuesday, covering dozens of communities in the province including Regina, Yorkton and Prince Albert.