'We have no help': Sask. mom laments lack of services for son with autism

'We have no help': Sask. mom laments lack of services for son with autism

The mother of a Prince Albert teenager with autism says delays in services and treatments have caused his mental health to decline.

“We currently just rotate a cocktail of medication to ease the symptoms,” said Courtney Lehner.

She says due to the lapse in therapies and psychiatric care, 18-year-old Reid’s condition has worsened and he’s now prone to violent outbursts.

“He’s getting worse and worse daily. He went through a phase where he’d just smash things. And we’re not talking one or two things, we're talking dishes, TVs, pictures. Impulses to run out the house in the middle of the night, aggression because of autism that’s what happens,” she said.

The family waited 14 months for Reid to see a psychiatrist, she says.

During that time the death of Reid’s grandmother and not being able to get his medication adjusted to the proper dosage for his size contributed to the decline, says Lehner. He often doesn’t want to leave his room and when outdoors he’s run away.

“And we have no help for it,” Lehner said.

Before his decline, Reid helped run an online gift basket business with his mom and was the recipient of the city’s Terry Fox Award.

The Saskatchewan Health Authority (SHA) says the Prince Albert region was without a youth psychiatrist for over a year in 2020-21. The SHA has since hired one and is looking to hire another.

Lehner says Reid’s anxiety was so high he was unable to attend school and had to be homeschooled.

“He needs therapy. He needs social interaction, he needs groups to be in, he needs stuff that’s going on,” she said.

Not attending school also made it more difficult for Lehner to access some services and she has had to seek them out on her own and pay for private care.

Reid does see a therapist from Autism Services but Lehner says it’s only 45 minutes once a week. Lehner said she’d like to access mentors and respite care for Reid and to help alleviate stress on her and her family as they care for him around the clock.

She also would like the system made easier to navigate for families with autistic teenagers as they grow into adulthood. Because Reid is now 18, Lehner was told to seek adult services through Community Living Service Delivery (CLSD).

CLDS is a branch of the Ministry of Social Services that works with adults with intellectual disabilities and helps them access community-based services.

“He is unable to care for himself in any way. He’s in a bad state of OCD (obsessive-compulsive disorder). His anxiety is through the roof," she said.

She made contact with CLSD in the fall and was told Reid’s application was lost.

“The problem I’m running into and I think the biggest frustration is when they tell me his paperwork has been lost. And when they tell you that these applications have been delayed, they keep telling you to be patient,” she said.

Lehner left her job to care for Reid and says paying over $2,000 a month for Reid’s care has been a financial burden.

“That’s a lot of money to put out of our pocket to get services that he deserves,” she said.

“But what they don’t get is that every day seems like a month, and every month seems like a year in Reid’s situation and in our family's situation I don’t think it’s fair because of their mistakes.” 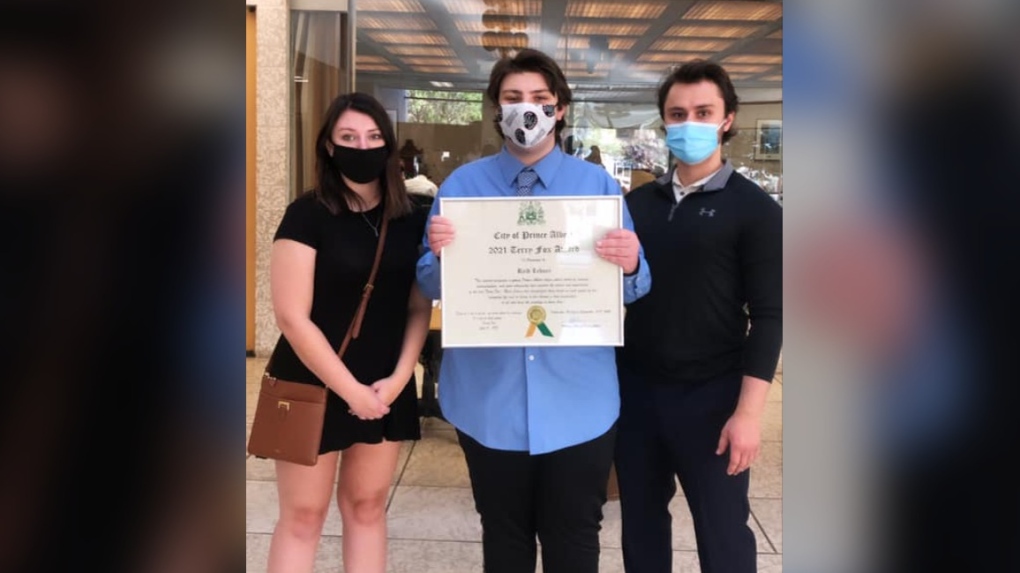 Reid Lehner, centre, used to run an online gift basket business with his mom and was the recipient of the Prince Albert's Terry Fox Award. (Submitted photo)

Reid Lehner, centre, used to run an online gift basket business with his mom and was the recipient of the Prince Albert's Terry Fox Award. (Submitted photo)

In a statement to CTV News, the Ministry of Social Services says it usually takes three to six months to confirm if a person is eligible for services from the time of receiving an application and documentation. The individual is assigned to a caseworker to identify the needs of the client. Then the client is connected to services.

“Our goal is to ensure that the physical, emotional, and social needs of people with intellectual disabilities are met and that they are able to live as independently as possible within their own communities,” director of community and client services Joseph Swan in a statement.

Lehner says CLDS told her they may have to wait until September before CLDS could get some services started for Reid.

“We can give him all the love in the world, but we certainly can’t give him therapies, and you know social interaction. And we just can’t give him that. He needs the services from the government and they just aren’t coming,” said Lehner.

Since contacting the media, CLDS told Lehner they have assigned a caseworker on Reid’s file, she said.

Democratic Sen. Raphael Warnock defeated Republican challenger Herschel Walker in a Georgia runoff election Tuesday, ensuring Democrats an outright majority in the Senate for the rest of President Joe Biden’s term and helping cap an underwhelming midterm cycle for the GOP in the last major vote of the year.