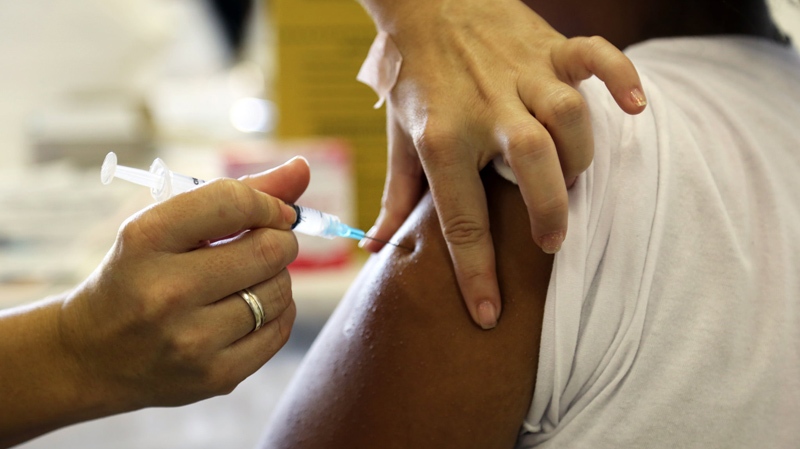 An HPV vaccine is pictured in this stock photo. (Pan American Health Organization-PAHO via Flickr)

SASKATOON -- University of Saskatchewan researchers are leading a national research project to help eliminate cervical cancer in Canada by 2040, the university says.

Almost all cervical cancer is caused by human papillomavirus (HPV), a viral infection that is the most common sexually transmitted infection.

While HPV vaccination programs in schools can help prevent cervical cancer, vaccination rates across Canada vary from 60 to 90 per cent, the university said in a news release.

“To eliminate cervical cancer, we need to aim for at least 90 per cent immunization rates right across the country,” said researcher Dr. Cory Neudorf, who is president of Urban Public Health Network (UPHN), which is leading the $1.6-million project.

He is also a faculty member in community health and epidemiology at the U of S College of Medicine and a consulting medical health officer with the Saskatchewan Health Authority.

The UPHN has been commissioned to collect data on vaccination rates across Canada and to assess barriers to vaccination in local regions of the provinces.

“We aim to determine the various reasons people have for not being immunized against the virus, particularly among lower-income groups, new immigrants, Indigenous populations or those living in remote areas where vaccination rates seem to be lower,” Neudorf said in the release.

“We know there are challenges around access to vaccination, such as accessibility of clinics or school-based delivery and staff shortages, as well as misconceptions about vaccine safety, vaccine refusal, cultural beliefs, and health literacy. But we need to determine to what extent these factors are playing out across the country and also determine how certain regions have achieved better coverage than others so that we can learn from different approaches.”

At the end of the two-year project, the group will make recommendations to guide government funding and changes to program delivery.