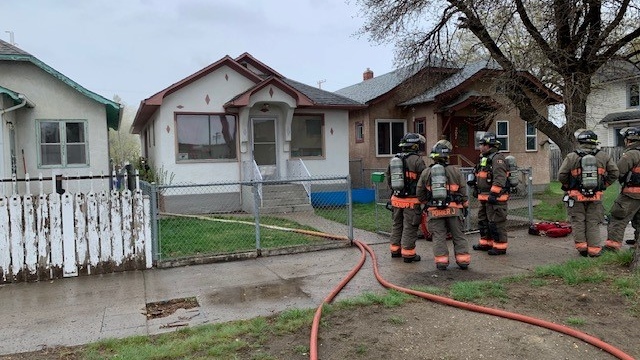 Saskatoon firefighters used a fire suppression grenade Friday to get control of a blaze in the Riversdale neighbourhood.

Crews were dispatched at 2:59 p.m. after multiple 911 calls about smoke coming from a house in the 200 block of Avenue H South.

Five trucks and the battalion chief were sent to the house. At 3:03 p.m., crews arrived and began fighting the fire. Natural gas and electrical supply were cut off to the home as a precaution.

Firefighters made their way into the home at 3:10 p.m., where they encountered zero visibility, heavy smoke and high heat. The basement was fully involved in flames. Crews exited shortly after to dispense a suppression tool that uses an aerosol system to help extinguish the fire.

"Using a basement window at 3:21 p.m., the suppression tool was activated and placed in the basement. It requires three to four minutes to work without water or ventilation being applied. This suppression tool interrupts the chemical chain reaction of fire by suppressing the flames and bringing down the heat. This tool does not completely extinguish the fire but changes the fire's environment," the Saskatoon Fire Department said in a media release.

The fire was brought under control by 4:28 p.m.

Four people were evacuated prior to the fire department's arrival. One person was treated for smoke inhalation.