Sask. woman alleges baby was 'thrown in the garbage' after miscarriage at hospital

Sask. woman alleges baby was 'thrown in the garbage' after miscarriage at hospital

Warning: This story contains details that may be upsetting for some readers.

Justine Hunter was a few days shy of being 12 weeks pregnant when she walked into Victoria Hospital in Prince Albert in December 2021.

Justine says she was bleeding heavily when she was hooked up to an IV in the emergency department. After a bedside ultrasound, a doctor later came in and told her she was suffering from a miscarriage. She says the experience was “traumatic and scary.”

The experience left Justine and her husband Ben in shock. They say the hospital didn’t provide them with any aftercare or support information when they left to return home to their other child.

“Not a pamphlet, not papers telling us what was going to happen next, where our baby was going or what kind of resources there are for us to help with this situation,” she said.

When Justine eventually got a hold of Victoria Hospital, the person on the phone questioned if she had “actually given birth to anything.”

“Then she told us she was very sorry, that she thinks overzealous cleaners came into the room and threw our baby in the garbage before it was supposed to go to the lab right away,” Justine said.

The couple filed a complaint instantly with the hospital with the quality assurance department and said they still haven’t heard back, leaving the family with endless questions.

“Can we find out what’s going on? How did this happen? Was this supposed to happen? Is this common?”

In an email to CTV News, the Saskatchewan Health Authority (SHA) declined an interview and said it will not comment on patient care due to patient confidentiality.

However, in a letter they provided to the family in March, the SHA says “we recognize problems that go unnoticed are missed opportunities for improvement.” 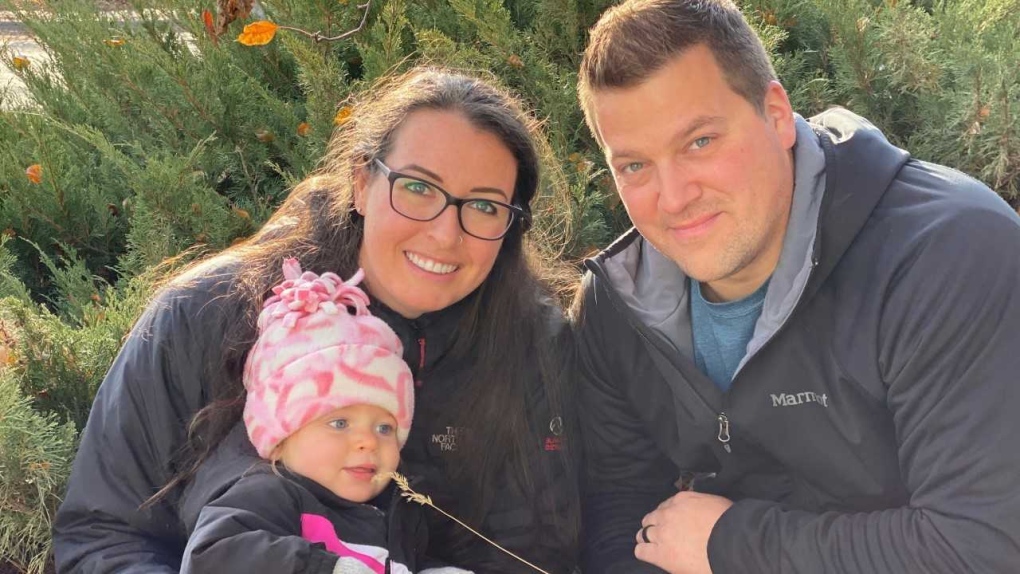 Justine and Ben Hunter with their daughter. (submitted)

In the letter, the SHA details steps taken to prevent a similar situation happening to others. Justine had her miscarriage on Dec. 5, 2021 and 10 days later the SHA put in place a “discharge-teaching handout” for patients who experience a pregnancy loss.

In the letter, the SHA said it has a new department called “Clinical Standards.”

“They are in the process of reviewing all former regional policies and procedures with the goal to amalgamate them into standard provincial policies,” the letter said.

Housekeeping roles and responsibilities in the emergency department were also clarified.

Justine says in October 2021, the family had to put down a pet and received care and options “we didn’t even get that with our own baby.”

“Trying to deal with that trauma on top of everything else and the actual physical experience of miscarriage, it made the worst day of our lives even worse. I still think about it, it still bothers me that our baby is in the garbage,” she said.

The family is now hoping to share their story so that other people won’t experience the same thing at the Victoria Hospital and that people and their babies are treated with “dignity.”

“I have a feeling you go in there (the hospital), having a miscarriage, and you don’t know what kind of standard care you should get and things like this will probably slip through the cracks,” Justine said.

Ben says the big takeaway is to be able to share their story and hope it makes a difference if someone else is going through the same experience.

The couple says they’ve been corresponding with the hospital for five or six months and have been patiently waiting for an answer about what happened to their baby.

Lindsay Gareau specializes in perinatal mental health with Prairie Heart Counselling and says it’s important for all members at a hospital, such as nurses and doctors — and even security guards — to be trauma-informed.

“Even though it’s not a big deal to you, or you don’t understand what’s going on, that experience is very real to that person,” Gareau told CTV News.

“I think it’s better to be a little bit scared and feel supported than scared and alone.”

“They’ll say ‘well no one helped me last time, I’ll figure it out on my own. At least I’m comfortable at home, or at least I can control my environment.”

She emphasizes that all people have a role to play in a hospital setting and wants healthcare workers, housekeepers, lab technicians and more to “understand the impact of their interactions with a parent who’s losing a child.”Gareau says if families don’t have tangible closures with death, it carries with a person.

“If we can have a ceremony, if we can have a memorial, that’s a tangible closure. But if that gets taken away from you — versus you choose to not do it — it’s a whole different thing.”

Since the Hunter family was unable to have their baby cremated, they plan to plant a tree on their new acreage to honour the child they lost.

Help will arrive at the children's hospital in Ottawa next week as it continues to see "unprecedented volumes" of young patients suffering from respiratory viruses.

As Musk is learning, content moderation is a messy job

Since the world's richest man paid $44 billion for Twitter, the platform has struggled to define its rules for misinformation and hate speech, issued conflicting and contradictory announcements, and failed to fully address what researchers say is a troubling rise in hate speech.