SASKATOON -- Allan Barilla, general manager at Morsky Construction, was overseeing a 13 kilometre stretch of roadwork on the eastbound lanes of Highway 16 between Denholm and Maymont, about 90 kilometres northwest of Sasaktoon.

“Traffic's only allowed to drive in a passing lane, and we do have a message board that says that the right lane is closed for the next 13 kilometres, to keep left,” he said,adding there were speed radar signs, arrow boards, and tapers, areas where two lanes transition to one with the use of cones.

That didn't appear to matter for one driver

Just after 2 p.m. Monday, crew members at the beginning of the construction zone radioed Barilla, warning of a driver speeding past the lineup.

“They estimate he was doing about 140 kilometers an hour,” said Barilla. “He went through four of the cones … and they saw those go flying in the air.”

Barilla took a video with his phone as the car passed the long line of vehicles, approaching the lane he was standing in near his parked truck.

“He was coming super fast, and I was at the point of deciding whether I go left or right,” he said. “He probably passed me, or turned in front of those vehicles at I'm guessing about 130 and continued on.”

Another member of Barilla’s crew was also recording on her phone.

“Her video got a picture of him giving us the finger as he went by,” said Barilla.

After that, Barilla says the driver weaved in and out of traffic, ran over cones and hit the ditch a couple of times.

“He not only passed in the closed-off lanes … sometimes he was trying to pass on the grass on their left side, whatever pavement he could have plus grass.”

Barilla says as the driver approached the end of the construction zone a cone became stuck under his vehicle. He tried "to do a little swerve" to dislodge it and lost control, heading across the median and into oncoming traffic.

“He was going down the wrong side of the westbound, and then he finally hit some vehicles and ended up flipping over in the ditch on the north side,” he said.

According to a police news release, around 2 p.m. Monday, Warman RCMP responded after a red car was reported heading the wrong way through a construction zone at a "high rate of speed, weaving in and out of traffic and almost hitting highway workers."

The 21-year-old driver of the was transported to hospital, RCMP said. No life-threatening injuries were reported, according to police.

The investigation into the incident is still ongoing. 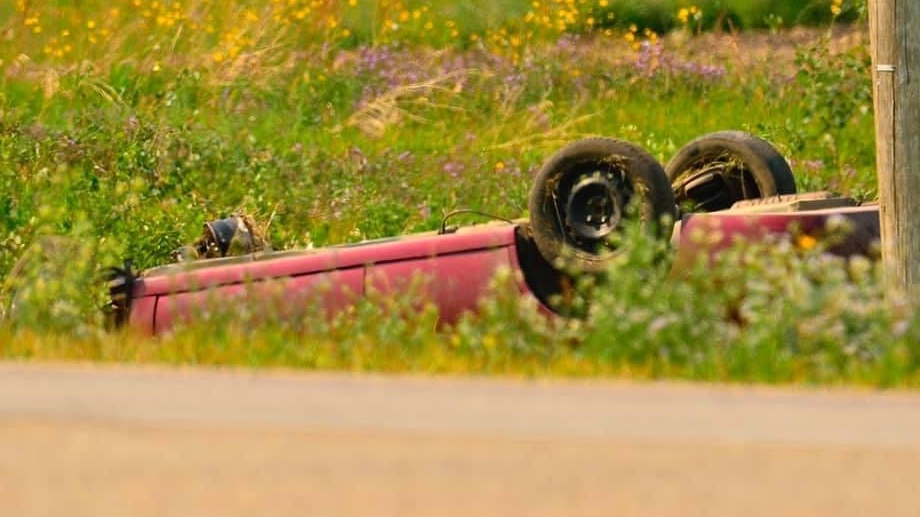 SGI manager of media relations Tyler McMurchy said there were 101 collisions in work zones around the province in 2020, resulting in 35 injuries and one death, and typically Saskatchewan highways see between 100 and 200 collisions a year.

"These are our neighbours, our friends, our brothers, our sisters, our sons, our daughters,” said McMurchy. “The very least we can do is offer them the respect of following the speed limits and paying attention to the signage, and doing what we can to keep them safe.”

“It's maybe worth noting that if you're travelling through an occupied construction zone that's marked for 60 km/h and you go through that at say 100 km/h, that's a ticket that's going to cost you more than $1,000.”

Barilla said he’s worked in the road construction industry for 39 years and unfortunately has seen many similar incidents.

“It is an eye-opener for everybody, and a reminder for everybody that in a split second something can go wrong,” he said. “The only thing that protects us on this highway is paint, and plastic. The cones and the paint, and that's no protection at all.”

He says it’s also a reminder to motorists to slow down and be patient when encountering road construction.

“We all want to go home to our family as well.”