Prince Albert Food Bank gearing up for the holiday season

Prince Albert Food Bank gearing up for the holiday season

The Prince Albert Food Bank has been trying to keep up with the increasing demand for food hampers in the city.

This season, the agency has seen a 10 to 12 per cent increase in the hampers it gives out per month.

“We would average now over 1,100 hampers a month. That translates into just over 3,000 people. So on a busy month, we basically serve about eight per cent of the population of Prince Albert and surrounding areas,” said Kim Scruby, executive director with the Prince Albert Food Bank.

While there is no separate Christmas hamper this year, the agency is adding more baked goods and pastries to the existing hampers to give it more of a “Christmas feel.”

Scruby says they are able to keep up with the increasing demand thanks to the donations and different community efforts in Prince Albert.

“Recently SUNTEP [Saskatchewan Urban Native Teacher Education Program] brought in close to 5,000 items. We’ve had support coming from most of the schools in PA also.” 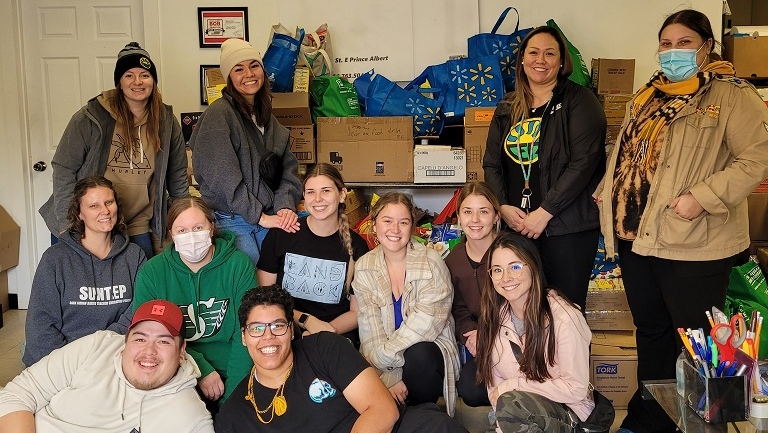 Students from the Saskatchewan Urban Native Teacher Education Program brought in close to 5,000 items to the Prince Albert Food Bank.

Scruby says they are expecting 3,300 families this December, which means they will give away more than 1,100 hampers. He adds the agency has seen an increase in the working family demographic as well.

“Since inflation started to kick in, we’re seeing a huge increase in working families coming in, about 28 per cent of an increase.”

Families who are in need of a hamper can head to the Prince Albert Food Bank. Each family can get one hamper per month by presenting a valid government ID.