SASKATOON -- Calvin Bruneau found an unexpected visitor while unpacking his groceries after a Costco shopping trip on Saturday.

While emptying a cardboard box he used to bring groceries home from the Marquis Drive Costco, Bruneau believes he spotted a black spider lurking inside.

“I asked my son to keep an eye on it while I grabbed a container because I could tell right off the bat that it wasn't a regular spider that you would typically see around here,” Bruneau said.

Upon closer inspection, Bruneau recognized a red spot on the spider's stomach, the signature of a black widow. The venomous spider is uncommon in western Canada.

"If the spider would have got out and bit someone, the person would be sick and you wouldn't know to think that it would be from a poisonous spider."

If a person is bitten one of the spiders, their reaction depends on where the bite occurs and their sensitivity to the venom. Also, the amount of venom injected is a factor.

While Health Canada suggests anyone bitten by a black widow should remain calm, it is recommended they seek medical attention.

One expert believes the spider did not come from somewhere in Saskatchewan, but rather from a warmer climate.

“Given that it’s kind of cold out now, I would say that it came from California,” said Felix Sperling, Univesity of Alberta biological sciences professor. 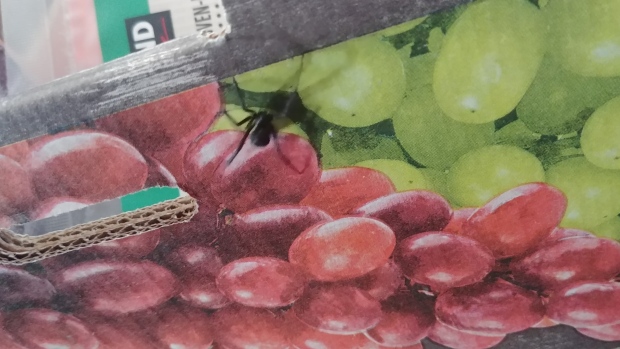 Bruneau said he did notice the box used to pack his groceries was from Grape Man Farms, a California-based company.

Costco foods and Grape Man Farms have not yet returned CTV News Saskatoon's requests for comment.

Bruneau said he doesn't blame Costo for the incident.

"It's not going to change how we shop or what we buy from there," Bruneau said. "This could have happened anywhere."

As for the black widow, it's now in the care of a "spider enthusiast" in Saskatoon, Bruneau said.