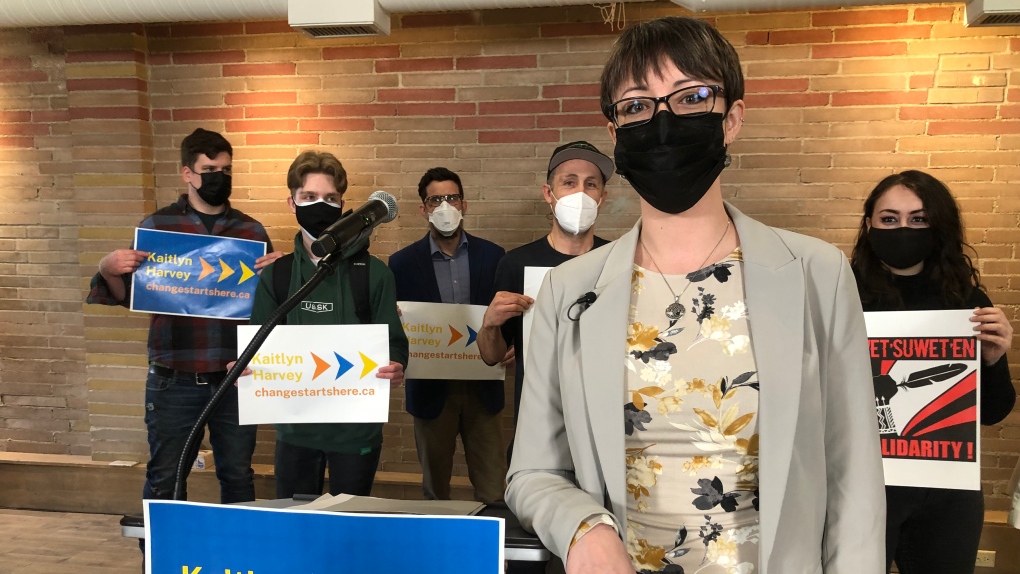 Métis lawyer and self-described climate change activist Kaitlyn Harvey has announced her candidacy to run for the NDP leadership in Saskatchewan.

Harvey says she will be advocating for reconciliation with Indigenous peoples, as well as fighting climate change and moving away from fossil fuels towards green initiatives.

“It's something that's going to be part of our economy for now, because it has to be,” she said of oil sands and pipeline projects while speaking during her campaign kickoff in Saskatoon.

“We can't just flip a switch and turn it off, and that's not what we're proposing," she said.

“What we're proposing is a managed transition, and using the resource wealth that we have, while there's still a market, in a way that is pragmatic and responsible and puts that money back into Saskatchewan communities and builds that industry going forward — a green industry renewable industry.”

Harvey ran for the NDP in the 2020 Saskatchewan election in Saskatoon-Willowgrove, losing to Sask Party MLA Ken Cheveldayoff.

She currently doesn’t hold a seat in the legislature.

“I'm excited for the fact that I don't have a seat,” she said.

“We've got two years before the next election and I can use that time to do the hard work that our party needs to do, to go around the province, talk to people, build that capacity within our party, within our communities, do that networking, meet with grassroots people.”

Regina Lakeview MLA Carla Beck has already picked up several endorsements to be the next leader of Saskatchewan’s NDP, but Harvey says she doesn’t want to approach the leadership race as pitting members of the party against each other.

“We are both working, we're all working to benefit our communities and represent the people of this province,” she said.

“We need to recognize that we all have the same interests, we're coming to this problem from a good place, and we're all trying to do some very hard work.”

The NDP's current leader, Ryan Meili stepped down in February following the party's byelection loss in the NDP stronghold of Athabasca. He is staying on until a new leader is selected.

The party will pick its new leader in June.

The Invasive Species Council of B.C. is asking the public to report sightings of a 'highly toxic' plant that can leave people's skin blistered and burned – something one family recently learned the hard way.

Loretta Lynn, the Kentucky coal miner's daughter whose frank songs about life and love as a woman in Appalachia pulled her out of poverty and made her a pillar of country music, has died. She was 90.