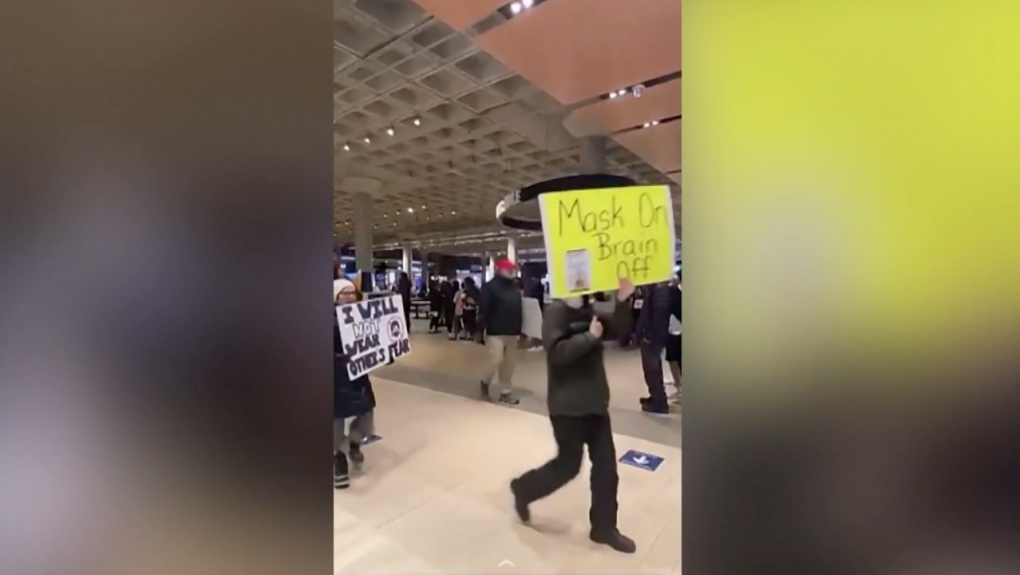 SASKATOON -- A group of anti-maskers were at Midtown Plaza Saturday afternoon protesting against the new mandatory mask policy in Saskatoon.

In a video circulating on social media, a group of about 25 people can be seen walking throughout the mall without wearing face masks, holding up signs and chanting.

Brooklyn Mann, who was at the mall when the protesters were there, said she was approached by some of them who pointed to her mask, saying that she has been lied to.

She added that one of the protesters came up to her and was talking to her from a close distance without wearing a mask and would not let her leave.

“I felt attacked and I felt really anxious. And when they got close to me and I was up against the wall, I felt like crying,” she told CTV News.

“They’re protesting their rights but they aren’t giving me my own rights if they’re getting that close.”

She said she respects that everyone has their own opinions but didn’t appreciate the way they went about it.

Mann said the demonstration was especially concerning for her because her father has cancer so she is being extra cautious while out in public places.

Saskatoon police said they were called to Midtown Plaza around 3 p.m. for a report of a disturbance.

Police said the group left the mall when asked by officers and no arrests were made.

As of Friday, people in Saskatoon, Regina and Prince Albert must wear a face mask while in indoor public places such as malls and other facilities in an effort to limit the spread of COVID-19.

“They were mandated for everyone’s safety and I mean you don’t know anyone’s stories but your own, so just for everyone to be safe and be cautious of these anti-maskers,” Mann said.