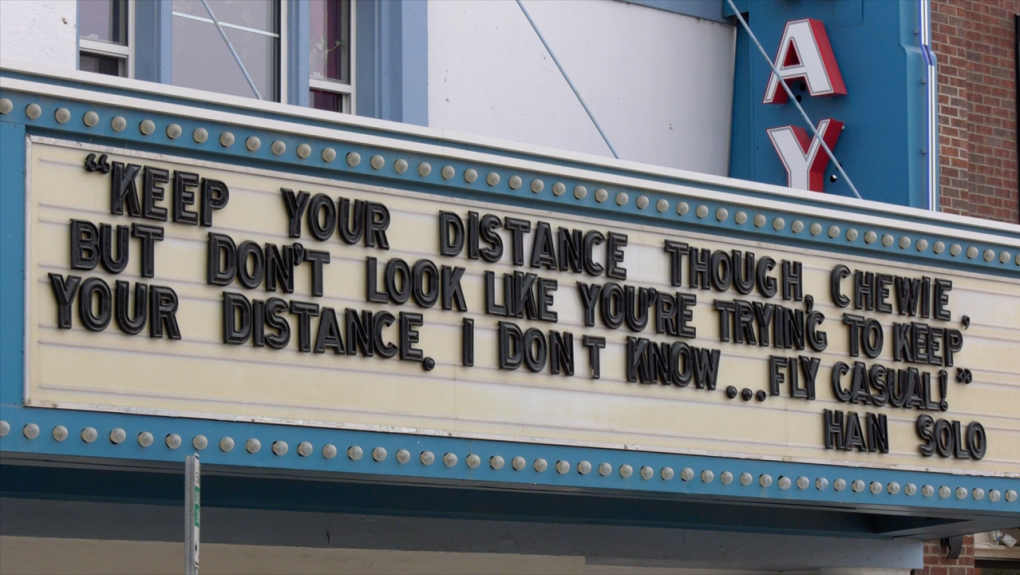 After the onset of the COVID-19 pandemic the Broadway Theatre in Saskatoon began posting playful messages on its marquee.

SASKATOON -- The Broadway Theatre is closed but its staff are keeping the entertainment alive by posting comedic and inspirational messages on the marquee.

“It just was a no-brainer to say well, if we have this public face, this marquee, and if we can just do one little thing in a week that gives people a chance to breathe a little, and a chance to be reflective and a chance to maybe have a little bit of a laugh and to be encouraged, we just felt like that was another part of our job here,” said Kirby Wirchenko, executive and artistic director of the Broadway Theatre.

The theatre has posted nine different messages since March 13 and posts a new one each week.

The messages range from things as simple as “wash your hands, love each other” to relatable quotes from famous movies.

Wherever you+yours are in the galaxy: your Broadway loves you. We encourage you to take this wise counsel, and we will see you on the other side.

May the force be with you! pic.twitter.com/MSr3wTgMbC

The Broadway Theatre has been closed since March 16 due to restrictions around large public gatherings during the COVID-19 pandemic.

Wirchenko said he also laid off all 20 of his staff, including himself.

“We all knew right away, the best thing we could do for the future health of the organization was getting on EI, hunkering down and eating noodles for a few months so we could give the place the best chance to not just reopen but to reopen and be very strong.”

The Broadway Theatre has 430 seats and attracts around 80,000 people a year to its various film, music, comedy and theatre events.

“Right now is one of the two busiest quarters, typically it’s October, November, December and then again in February, March and April. So, we’re smack dab in the middle of that. I think for March and April, we would be getting about 10,000 people a month,” Wirchenko said.

However, he and other laid-off staff still wanted to make the theatre’s presence known during the COVID-19 pandemic.

Traffic has been down in the Broadway area due to more and more people staying home, so Wirchenko and his staff have been posting pictures of the marquee on their Twitter, Instagram and Facebook accounts, garnering a lot of attention.

Wirchenko said he has received a number of messages, calls and even mail from people saying the marquee messages have helped keep them positive during these times.

Other theatres around North America, including Mirvish Productions in Toronto, are doing similar displays to lift people’s spirits.

“It’s not surprising. It’s weirdos like us who run these places all over the world and we still care. We still care about not just our place but the place that we occupy and the community that we’re apart of,” Wirchenko said.

DeeAnn Mercier, executive director of the Broadway Business Improvement District, said these messages are also providing hope to other businesses in the area.

Mercier adds that it’s also important for people in the community to show support for the Broadway Theatre and other local venues.

“It’ll be a while unfortunately until we can go to the Broadway Theatre again in the same capacity as we used to. The whole arts and culture of our country is having a real hard time right now. The venues, the other gathering spaces are all closed. So, I think as a community, we need to support them and show they’re a valuable part of our city.”

From your Broadway to you and yours (all credit to Ferris Bueller, of course)...hoping the sun and spring are shining on everyone’s spirit: pic.twitter.com/cY5ni117qs

Wirchenko said the theatre will continue posting new messages throughout the pandemic and for as long as it takes after that.

“Whether it’s tiny or whether it’s measurable, we want to go home and feel like we made our city a better city.”