SASKATOON -- A deserted Saskatoon luxury home slated for demolition by the city has been granted a temporary reprieve.

Heavy equipment brought in to tear down the house sat idle in the driveway Tuesday morning as a lawyer representing the home’s owner argued for its future in a Saskatoon courtroom.

The home, located in the city’s upscale Briarwood neighbourhood, has sat vacant for several years and was slated for demolition by the city over concerns about mould growth.

However, the home will remain standing for now after a 10-day freeze on the demoltion was granted at Court of Queen’s Bench.

Saskatoon Fire Department assistant chief Wayne Rodger previously told CTV News that attempts to contact the property’s owner about the mould issue had been unsuccessful and that the city’s only course of action left was to demolish the home.

The owner’s lawyer, Ling Ma, said the home is owned by a man named Liu Yu who lives in China. She said Yu is now aware of the issue and hopes to fix it.

“This (would represent) a really big loss for him and it’s quite a fair amount of money,” Ma said outside court Tuesday morning.

Ma said Yu learned of the demolition order after a relative saw a news report about the city's plans to level the house.

In a news release sent to media Tuesday afternoon, the City of Saskatoon said the property has been abandoned since 2016 and poses a serious health and safety hazard to neighbours.

The construction equipment brought in to carry out the demolition will now be removed from the property pending the court decision, the city said. 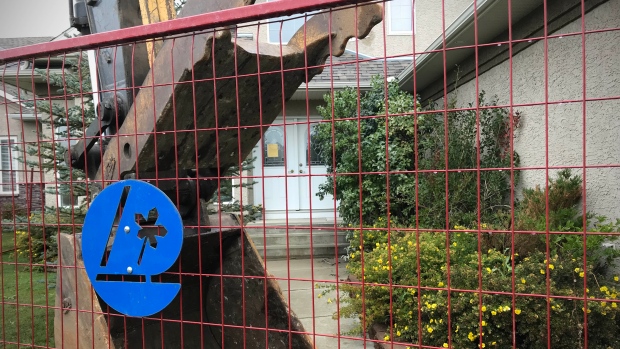 The city also said the cost of levelling the home will be the owner’s responsibility and could be added to his property tax bill.

In an interview with CTV News, Coun. Sarina Gersher, who represents the ward where the home is located, said the owner has been his paying property taxes and at this point, the house is structurally unsound.

A hearing to decide the future of the house is scheduled for Oct. 11 at Court of Queen’s Bench.