COVID-19 updates for Saskatoon and area for Friday, May 1

During a news conference in Regina on Friday afternoon, Saskatchewan Health Authority (SHA) CEO Scott Livingstone said a COVID-19 outbreak will soon be declared in Beauval.

On Friday, the province said the far north — where the community is located — was home to 19 of the province's 26 new confirmed COVID-19 cases.

Another northern community, La Loche, is currently grappling with a COVID-19 outbreak that has resulted in dozens of cases and claimed two lives.

On Friday, the province said the far north was home to 19 of the province's 26 new confirmed COVID-19 cases.

According to the Saskatchewan government's latest numbers, 68 of the province's 112 active cases are concentrated in the far north.

"While we don't believe there was any additional risk created to staff or public because of this delay in the public notification, we do recognize that it should have occurred sooner," he said at a news conference in Regina.

"It is certainly not the way in which the Saskatchewan Health Authority wants to be known as a good communicator with our partners and our public and we are working closely with the Ministry of Health to immediately correct that situation so it doesn't happen again."

The Saskatchewan Health Authority (SHA) has declared a COVID-19 outbreak at Victoria Hospital in Prince Albert.

Medical Health Officer Dr. Khami Chokani declared the outbreak due how long a COVID-19 positive patient stayed in the hospital without knowledge of their condition, according to a SHA news release.

The patient is the only COVID-19 case at the facility and there is no evidence of transmission within the facility, the health authority says.

The province has released an updated version of its five-phase plan to re-open the province starting next week, including new guidelines for retail stores and golf courses.

The first phase of the plan, scheduled to come into effect Monday, allows restricted medical services like dentists, chiropractors and optometrists to open for service again.

A Saskatoon musician is making people smile during the COVID-19 pandemic with his original song that pokes fun at life in quarantine.

“We just got back from wintering in Mexico at the beginning of March and then COVID hit so we missed our friends dearly and we never got a chance to visit them so I decided to write this song. At least I could share the song with them, make them feel better, put a smile on their face,” said Garry Gignac, who plays with a local band called The One-Eyed Dogs. 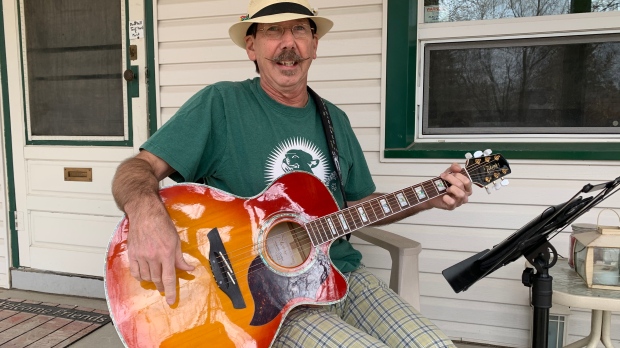 CTV Saskatoon has been asking for your COVID-19 questions - and on Thursday we answered them in our first COVID-19 town hall.

One of the questions Masiowski tackled was: What are the differences between COVID-19 and the regular flu?

“That’s my favourite question,” said Dr. Paul Masiowski, a neurologist who also teaches at the University of Saskatchewan.

“This is a situation that comes up a lot. It does have something in common with the flu in that it’s a virus and it spreads through the population and it can cause a problem with a cough and pneumonia-type lung infection. But there are some major differences."

The City of Saskatoon says it will temporarily reassign recreation staff to serve as physical distancing "ambassadors" after reports of people gathering in ways that violate the province's COVID-19 public health order.

"We have seen too many people not following the public health orders and beginning to gather in groups in parks and open spaces. This risks us losing the progress we have made in saving lives and keeping the community safe,” Mayor Charlie Clark said in a news release.

On Thursday the province said there were six new confirmed cases of COVID-19, bringing Saskatchewan's total number of cases so far during the pandemic to 389.

Just one new case, in La Loche, was reported in Saskatchewan's far north Thursday, a day after a death related to the virus and an increase of 11 new cases was reported in the region.

Eighty-eight cases in the province were considered active as of Thursday, with 50 of the cases concentrated in the far north.

Less than a week after a public health order restricted all non-critical travel into and out of northern Saskatchewan, the northern outbreak prompted the province to introduce  stricter measures with the ban now even applying to those with primary residences in the region.

In addition, northern residents are ordered to remain in their local communities, with all non essential travel restricted.

An Ontario-based epidemiologist called the La Loche outbreak the "most  concerning in Canada."

"The La Loche outbreak is the first I am aware of in an isolated northern First Nations community. These communities may have been protected in part by their remoteness, but COVID-19 spreading through such communities is potentially disastrous," David Fisman said.

An emergency official working in the province's north said the Beauval General Store is closed indefinitely after a preson tested positive for COVID-19 there.