SASKATOON -- As numbers of active COVID-19 cases continue to rise in Saskatchewan's far north, the virus has claimed a second life.

On Wednesday, the province said a person in their 80s from the region had died from the virus.

The news comes a few days after an 83-year-old resident of a long-term care facility in La Loche died in hospital, the fifth COVID-19 victim in the province.

The number of active COVID-19 cases in the far north again climbed on Wednesday as well, with 11 of the province's new confirmed cases there.

Of Saskatchewan's 86 active cases, 52 are concentrated in the province's far north.

Also on Wednesday, the Saskatchewan Health Authority (SHA) issued an advisory for customers who visited the Beauval General Store after a person tested positive for COVID-19.

The SHA instructed people who shopped at the store or purchased gas between April 12 and April 27 to self-isolate.

During a news conference in Regina Wednesday afternoon, Premier Scott Moe expressed his condolences and said testing is being ramped up in La Loche, where 38 of the far north's cases are located according to health officials.

"If there are people in La Loche that would like to be tested, they will have the opportunity to be tested. We won't be forcing people to be tested but we are asking them to be tested and we have the resources to test if need be, the entire community," Moe said.

The plan to increase testing includes home visits, drive-through options and using one of a handful of mobile testing machines recently deployed in the province.

Moe also said the federal government is sending a shipment of 25,000 face masks and 25,000 gloves to the region.

Schools in La Loche and work trailers will be provided anyone who needs help self-isolating, Moe said, with 65 spaces.

During the news conference, Moe said the SHA will also be sending 50 to 100 staff to Saskatchewan's far north to help with testing and contract tracing.

An SHA email obtained by CTV News provides a glimpse into how the staffing ramp-up might be achieved. 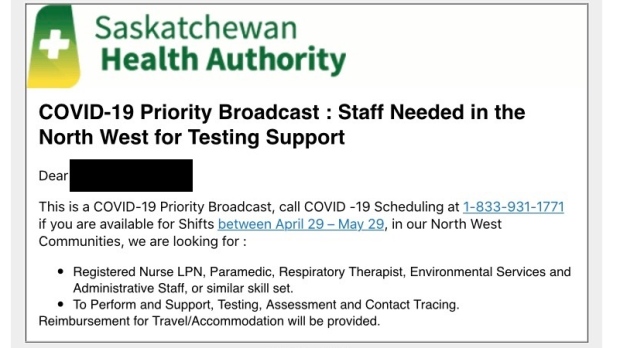 In the email, the SHA canvases for nurses, paramedics, respiratory therapists and cleaners who are willing to work shifts in the north, over a month-long period ending in late May.

Last week, a Public Health Order restricted all non-critical travel to the far north and non-essential travel between communities is discouraged.

Moe said the province is regularly consulting with communities about the order and whether a change needs to be made to the restrictions.