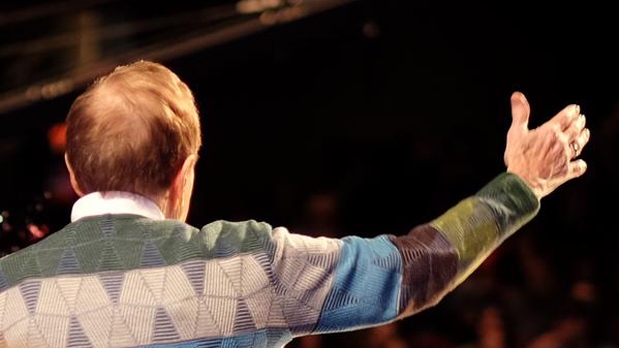 Bob McGrath at his final appearance during the 39th running of TeleMiracle. (CTV News)

Former Sesame Street actor Bob McGrath died on Sunday, according to a post on his Facebook page. McGrath had a long time connection to the people of Saskatchewan as a regular fixture on the Kinsmen TeleMiracle fundraiser.

He appeared on the annual telethon for nearly 40 years.

His family shared the news on his Facebook page Sunday afternoon.

“Hello Facebook friends, the McGrath family has some sad news to share. Our father Bob McGrath, passed away today. He died peacefully at home, surrounded by his family,” the post read.

McGrath was one of the original cast members of Sesame Street, appearing on the show from 1969 to 2016, according to his website.

In 2006 he was awarded the Saskatchewan Centennial Medal for his contributions to the province, and a Distinguished Service Award in 2013 from then-premier Brad Wall.

Ottawa tight-lipped on details as Canada, U.S. call out China over balloon

The federal Liberals have withdrawn an amendment to their gun bill aimed at enshrining a definition of banned assault-style firearms, citing 'legitimate concerns' about the need for more consultation on the measure.

White-tailed deer may be a reservoir for COVID-19 variants of concern including Alpha, Delta and Gamma, according to new research out of Cornell University that raises questions about whether deer could re-introduce nearly extinct variants back into the human population.

A group of airlines is asking the Supreme Court of Canada to hear their case after a lower court largely upheld the validity of Canada's air passenger bill of rights.