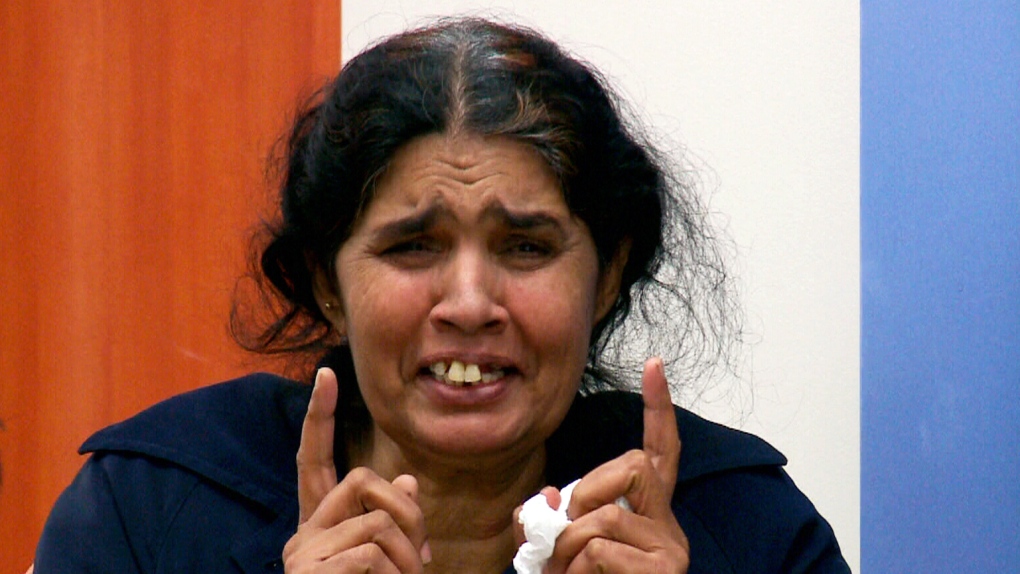 Jamila Bibi tears up as she awaits deportation to Pakistan in the Saskatoon airport on Tuesday, Sept. 16, 2014.

Jamila Bibi is safe and in hiding but still fears her life is in danger, according to friends.

Bibi was deported to her native Pakistan from Saskatoon on Tuesday.

The 65-year-old woman who fled to Canada in 2007 was accused of adultery in Pakistan and believes she could be stoned to death in her home country.

Sahana Yeasmin, a friend of Bibi’s, told CTV that Bibi was crying and could hardly speak when they talked over the phone Wednesday. She was still afraid she’d be killed and pleaded to Yeasmin for help.

A deportation was originally ordered for Bibi in 2011 after her bid to secure refugee status was rejected. The order was halted by the United Nations, however, after her lawyer, Bashir Khan, brought the case forward. The UN said they needed time to review her case.

The United Nations told CTV in an email Wednesday, while there was an initial request to halt Bibi’s deportation, they withdrew their request based on evidence from Canadian authorities — the email did not clarify when the request was lifted and what evidence was presented. They said they are still reviewing the case while she is in Pakistan.

Khan said he was not aware of the UN’s decision to lift the request but stressed it doesn’t weaken — neither legally or morally — the case that Bibi should not have been deported.

Bibi was falsely accused of adultery, Khan said. He said the case stems from a land dispute in which she was awarded property over her husband’s family, who then made the accusations as a way of getting back at her.

She came to Canada after being let out of jail on bail.

Khan said the Canadian government has decided Bibi can move elsewhere in Pakistan, despite also acknowledging that she is at risk from both individuals and state authorities in the country.

“Except that makes no sense to me because the criminal charge is outstanding and she’s a target of honour killing,” Khan told CTV News Channel. “She will be. She’s received threats already.”

Bibi was arrested and detained last week during a “pre-removal interview,” according to federal court documents. After being informed of the decision to deport her, the documents said Bibi repeatedly asked the officers for help, saying her life would be in danger in Pakistan.

She then became “hysterical” and began hitting herself in the head and chest, the officers said.

“I haven’t done anything wrong, not stolen anything, I worked and now they are doing this,” one officer quotes Bibi as saying in the documents.

“I can kill myself now,” she said, and was then arrested for “her safety and the officers.”

Yeasmin, who owns Meg’s Restaurant in Saskatoon where Bibi worked, said flowers and donations for Bibi have been pouring in to the restaurant since she was deported.