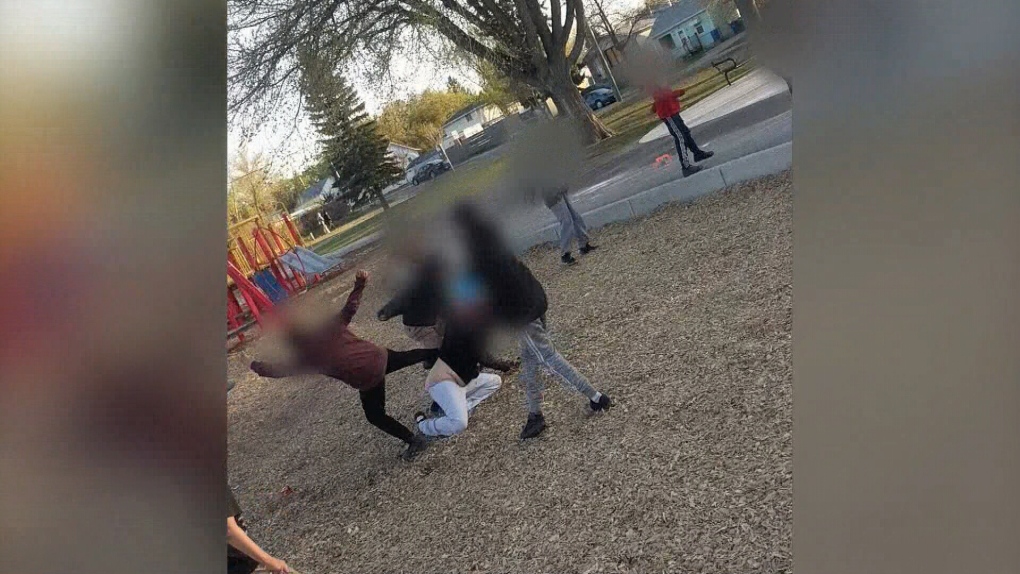 A screenshot from a video that appears to show an assault on a woman by several children at Pleasant Hill Park.

A 13-year-old girl has been charged in relation to the assault of a 33-year-old woman at Pleasant Hill playground Monday night.

Bonnie Halcrow, 33, was at the park around 7 p.m., when she was attacked by a group of children. Halcrow says she’s shocked that police laid charges.

“I just couldn’t believe it,” Halcrow said. “I just didn’t think any of them would be identified.”

The assault was caught on-camera by a bystander.

The girl is also charged in relation to an assault on May 13, when two girls —aged 10 and 14 — told police they were assaulted by a number of children around 7 p.m.

A spokesperson with the Saskatoon Police Service says the call centre has received a number of calls about a group of youths in the Pleasant Hill area causing disturbances and it wasn’t until recently the behavior crossed the criminal threshold.

Police say they have identified other youths involved in the assault. However, since they are under 12 years old, they won’t be charged.

The girl appeared before a provincial court judge before 10 a.m.

The girl is petite. She showed no emotion and looked down as she made her brief court appearance. She is out of custody and has been ordered to stay away from the two victims and the rest of the children who were involved in the alleged beatings.

For Halcrow, she says she’s still feeling the effects from the attack.

“My back is still hurting, I can’t sleep on my sides I have to sleep on my belly,” Halcrow said, adding she hopes this experience and the consequences help lead these children down a better path.

“They need to be put through a program that will open their eyes … of what they’re actions can lead them too,” she said.

Her next court appearance is June 6.

Police said a second teen has been charged in connection to the alleged playground beating, but the youth hasn’t been arrested yet.

The investigation into these incidents, and several others, is ongoing.