WARMAN -- Five weeks after his wife died during labour, Scott Jenkins says his family is still trying to find "a new normal."

"It's waking up, making sure these kids are happy, you know, keeping them busy, keeping their minds busy," said Jenkins, a dad to three kids.

Jenkins’ wife Aly, a well-known Saskatchewan curler, died in October from an amniotic embolism while giving birth to their third child. It’s a rare complication where amniotic fluid enters a mother's bloodstream causing the body and its organs to go into shock. She was 30 years old.

"It was the worst and best day of my life," said Jenkins, who recounts the moments before his wife lost her life and his daughter Sydney was born.

"We were joking in the hospital, joking that is was my birthday and I was kidding her that it was 'My day and not your day.' Then just something switched and in 10 minutes it went to chaos."

Aly started losing blood and soon after suffered a seizure. Doctors rushed her into surgery where they performed an emergency C-section and attempted to stop the bleeding.

Jenkins describes the experience as a blur, but one he remembers vividly.

"I can kind of still play it all back in slow motion what I did that day, while I was waiting in the room, and signing all these papers of consent to do 'this' surgery and 'this' surgery," Jenkins said.

"It was about five hours of surgery she was in, and then we got the news she didn't make it."

As a medical team tried to save Aly, newborn Sydney was rushed into the neonatal intensive care unit at Jim Pattison Children's Hospital.

"Sydney came into life and she wasn’t breathing for the first minute," Jenkins said.

"There was no brain activity, her lungs weren’t working, there were a whole bunch of issues, it was just a day I want to forget but unfortunately I never will forget it.”

Exhausted, Jenkins said he went home to try and sleep. When he arrived at the hospital the next day, he received some promising news.

"The doctor said 'As soon as your wife passed your daughter's health started to improve drastically.'  She was starting to breathe a bit more on her own, her brain functions started to move." 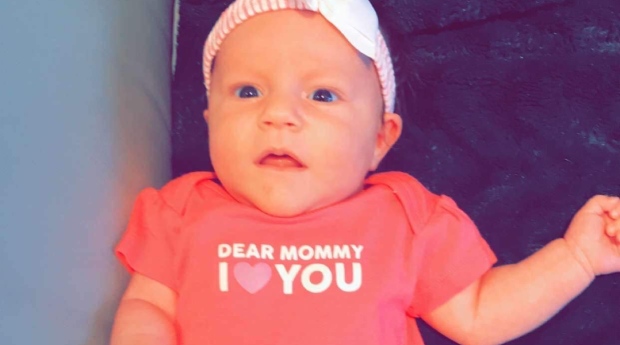 Initially, doctors told Jenkins it could be weeks before Sydney would be strong enough to leave the hospital.

But after nine days, she was ready to go home.

"She was probably hooked up to 50 machines and it seemed like every day, five were coming off," Jenkins said.

During Sydney's time in hospital, Jenkins began posting updates about her progress on Facebook as a way to keep family informed on her progress.

However, he was shocked to see support pouring from people all over the world.

"People reached out from the U.S., Australia, India and all these places I have gotten messages from, it's incredible all of the messages I have gotten. I don’t know how to repay everyone."

The support turned into financial donations. A GoFundMe page has raised more than $187,000 for the family.

"It definitely helps the kids in the future, college fund, it will be a big help."

Jenkins is in the midst of a year-long leave from his sales job, focusing on caring for Sydney, his 19-month-year old girl Avery and four-year-old son Brady.

"It pains me so much that she can't see these kids anymore, be with them, and help raise these kids."