Warning: Some readers may find an image contained in this story disturbing.

The charges come after an investigation by the Public Complaints Commission (PCC), according to a Saskatoon Police Service (SPS).

“I recognize that there may be questions about the next steps that we're going to take with our canine program in light of these charges,” police Chief Troy Cooper said during a news conference Thursday afternoon.

“I believe it would be premature to make any significant local changes until the resolution of these criminal matters.”

He emphasized the two incidents are unconnected and the timing of the charges is due to the fact the PCC finished the separate investigations at the same time.

The PCC began looking into the two incidents after formal complaints were filed. The charges were based on the recommendation of Crown prosecutors.

One of the officers charged with aggravated assault is a 13-year SPS member..

Cst. Cole Miklautsch is charged in connection with a July 12, 2019 incident in which a police dog was used to take a suspect into custody following a vehicle chase.

The male suspect was treated in hospital for a dog bite. He was charged with possession of the stolen property and evading police, according to police.

'HE TOOK A BLOODY CHUNK'

Justin Soroka, 29 was the man taken into custody during the 2019 incident.

"All I hear is 'quit resisting, I'm releasing my dog' and that was it, I blacked out (when) the dog bit me," Soroka told CTV News.

"I ended up enduring a rupture to my Achilles, I had tendons completely severed. I had 45 stitches and 56 staples throughout six months of healing and surgeries."

He admits that he was not in the "right state of mind" and was "on drugs and drinking" at the time.

However, he claims multiple officers had already subdued him and believes that Miklautsch should not have deployed the dog.

"He took a bloody chunk out of my skin. It wasn't like he just quickly bit me to get me to stop." 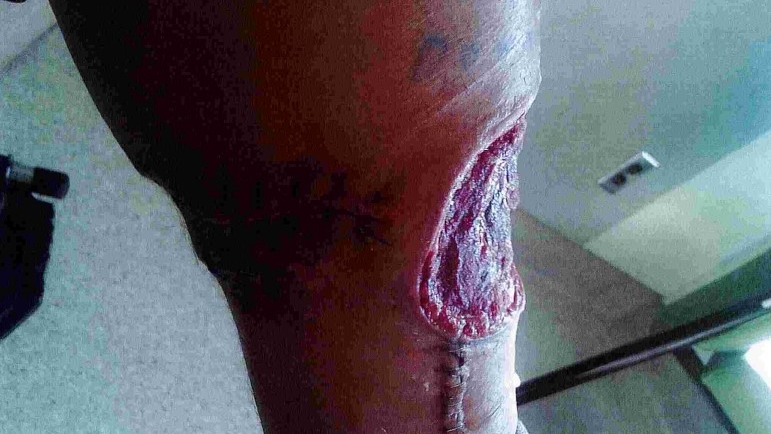 Soroka said he has made changes in his life and that he and his spouse are expecting a child.

"I would have taken a boot the face (over) my leg being completely mauled and maimed and looking like this for the rest of my life."

During the news conference on Thursday, Deputy Chief Mitch Yuzdepski said police dogs are trained to default to "as full of a bite as you can possibly get."

"When a dog engages someone … they're trained to actually bite and hold on. And, you know, if I have a training sleeve on, for instance, I can actually pick the dog up while he's holding on to my arm and swing the dog around so the dog doesn't release that grip," Yuzdepski said.

Cst. Dennis Baron, also a 13-year member, is charged with aggravated assault in connection to a June 1, 2020 incident in which police responded to a reported break-in at a fenced compound.

A male matching the description of the suspect was seen running from the scene, according to police.

A police dog was used in the suspect's arrest and he was treated for a dog bite.

He was charged with break and enter, drug possession and breach of conditions.

The two officers will be assigned to administrative duties pending the outcome of the court proceedings.

The police dogs involved in the incidents have been temporarily taken out of service, according to Cooper.

They are scheduled to appear in court on May 18 at 2 p.m.

-With files from Nicole Di Donato