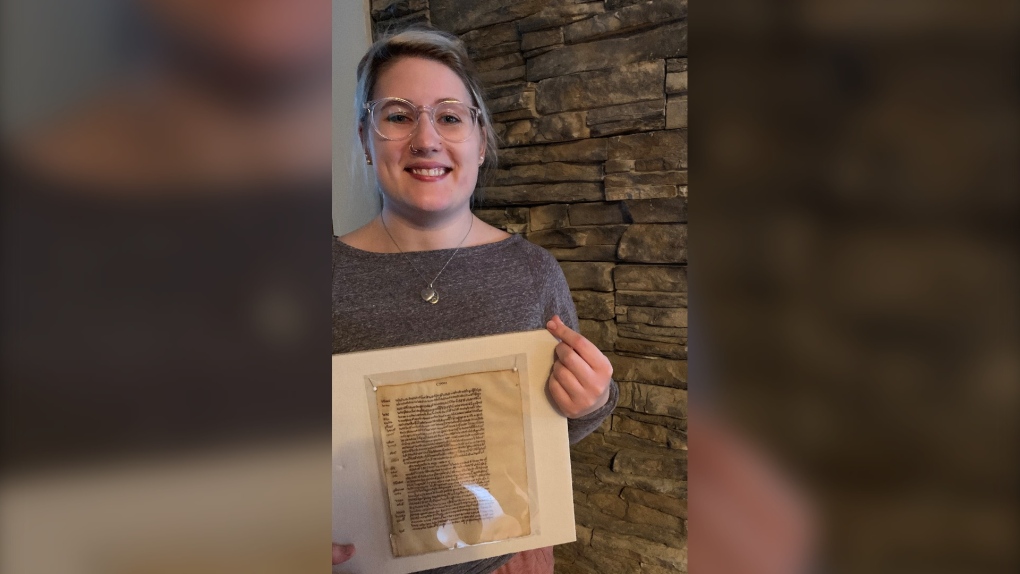 University of Saskatchewan (U of S) graduate student Ariel Brecht has been investigating an ancient manuscript. (Submitted photo)

SASKATOON -- After five years of studying a leaf from a medieval manuscript, University of Saskatchewan (U of S) graduate student Ariel Brecht believes she has discovered its holy purpose.

Pages from the manuscript were scattered throughout North America. It was written in a abbreviated form of Latin.

“I love medieval manuscripts so the idea that one was torn apart just makes me so sad,” she said.

After studying the artifact and searching for the other pages for five years, Brecht and her colleagues found more than 100 pages.

They determined that the leaf contained commentaries on the book of Psalms - a 13th Century preacher’s handbook used to help compose sermons.

“I find history utterly fascinating and this idea that putting something back together in its original format to see actually what it was like, and how it was used by this original person, is fascinating to me,” said Brecht.

Brecht says in 1957 the U of S bought a portfolio of different manuscript leaf fragments which included the leaf that inspired her project. The leaf is housed in the university library.

“I’m proud of all of my students, but it’s really gratifying when you get someone looking into something that is so well done and demonstrates a very high level of skill,” said history professor Fred Klaassen, who co-supervised Brecht’s project.

Brecht hopes to finish the project soon and to publish an article and a public transcription of the manuscript.