Rock carvings from more than a thousand years ago have been discovered at Wanuskewin Heritage Park.

Ernie Walker, Wanuskewin’s chief archeologist, made the rare discovery with the help of a bison herd.

Last summer, Walker was out feeding the bison at the paddock — about 800 metres west of the Wanuskewin building.

He looked down at the ground that the bison had been rolling around in and saw a boulder peeking through the dirt.

Upon further investigation, Walker noticed the rock had grooves in a definite pattern and determined it was a petroglyph.

“I was trying not to have a heart attack because I hadn't expected it,” Walker told reporters at the rock unveiling on Friday.

Walker believes Indigenous people carved the rock more than a thousand years ago.

The carving is known as “ribstone,” Walker says it resembles the bones of a bison and represents fertility.

Walker had surveyed the area in the 1980s and didn’t find anything. He believes the bison, who were brought to the park in 2019, exposed the discovery.

“They uncovered it, just with their normal activity,” Walker says.

“I like to think it's their message that they’re happy to be here.”

Days after the ribstone discovery, Walker and his team found three more petroglyphs and the tool used to make the carvings.

“This is tremendously significant and very unusual,” Walker says.

He says it’s rare to find the carving tool.

“You never get that,” he says.

The petroglyphs and carving tool are secured in glass, on display in the park’s building. 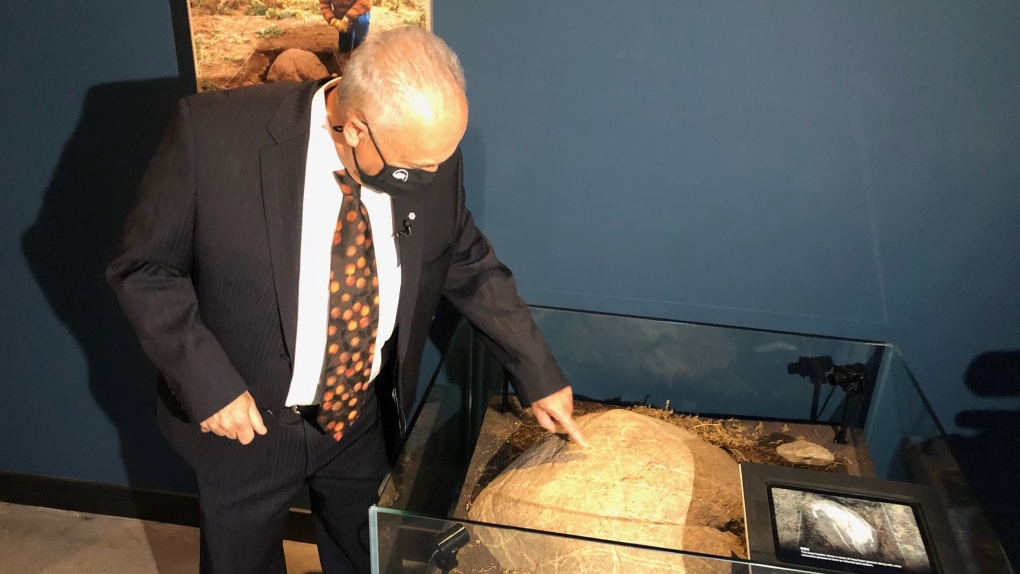 Ernie Walker believes the bison, who were brought to the park in 2019, exposed the discovery. (Chad Hills/CTV News)

Wanuskewin is in the process of getting recognized as a UNESCO World Heritage site.

With this rare discovery, park CEO Darlene Brander says Wanuskewin is one step closer to reaching the designation.

She says the petroglyphs were the missing puzzle piece in the UNESCO application.

Wanuskewin aims to become a UNESCO World Heritage site by 2025.