Permanent memorial site at Broncos crash site sought, but no decision yet 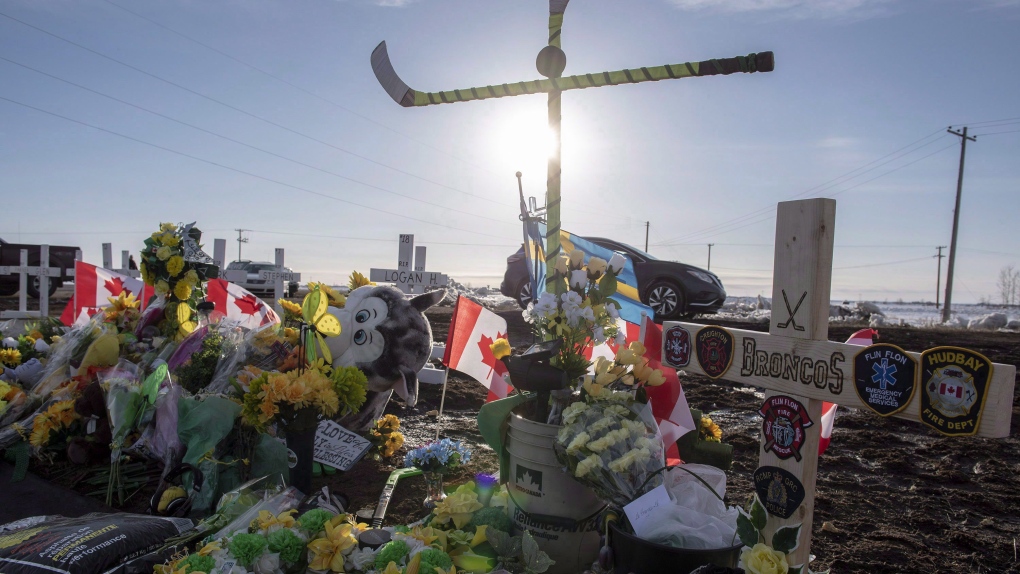 Hockey sticks, messages and other items continue to be added to a memorial at the intersection of a fatal bus crash that killed 16 members of the Humboldt Broncos hockey team last week near Tisdale, Sask. on Saturday, April 14, 2018. (THE CANADIAN PRESS/Liam Richards)

A community foundation set up after the fatal Humboldt Broncos bus crash is hoping for a permanent memorial at the site.

Team spokesman Grant Bastedo said Friday that no decision has been made by the Humboldt Strong Community Foundation on a potential roadside marker.

Members of the foundation are to meet in the fall to discuss the idea, although no date has been set, he said. A permanent memorial is something that will take some time, he added.

Sixteen people died after the April 6 collision between the Broncos team bus and a tractor-trailer unit at a rural Saskatchewan intersection known as Armley Corner.

Another 13 people were injured in the collision.

The Broncos were on their way to a Saskatchewan Junior Hockey League playoff game.

Former NHL player Chris Joseph, whose son Jaxon died, said on Twitter that he hopes the families are included in any memorial decision.

"Thank you for working on a memorial so quick for our boys and (team therapist) Dayna (Brons)," the tweet said. "I know the Swift Current Broncos lamented the fact it took many years."

Four players died in 1986 when a bus carrying the Western Hockey League's Swift Current Broncos hit a patch of black ice on the Trans-Canada Highway. A monument in the shape of a four-leaf clover was unveiled in 2016 at the crash site.

Government guidelines say there can only be one marker at an accident site and it must be at least 100 metres from any intersection.