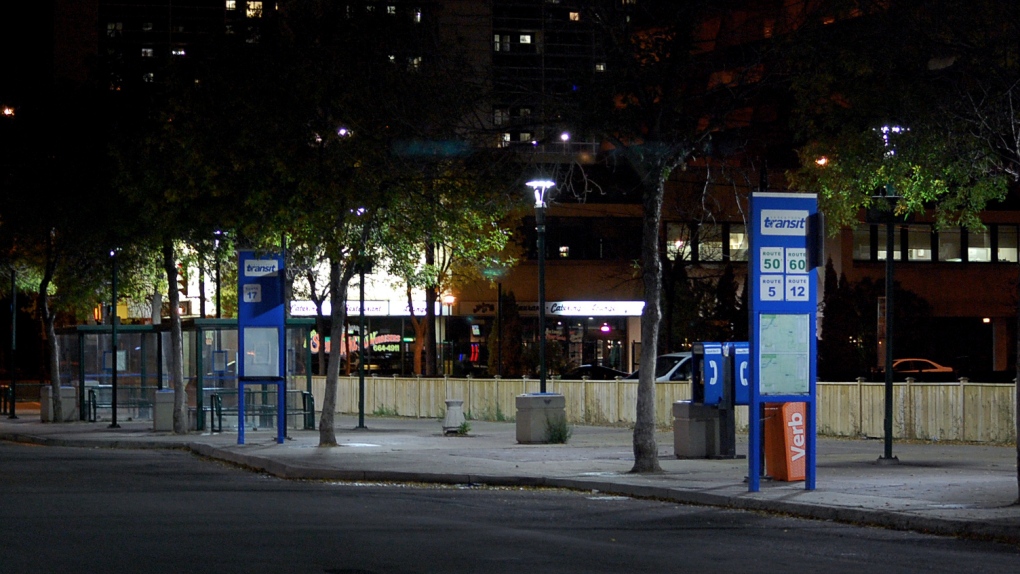 About 330 Saskatoon Transit union members were locked out by the city after the two sides were unable to reach a contract agreement following a 48-hour lockout notice.

The lockout means bus services in Saskatoon will be suspended indefinitely — only Access Transit, a service for people unable to use the regular bus system and which uses lift-equipped buses and cabs, will continue operating as normal.

The suspension is expected to affect thousands of transit users.

“If this lasts towards the winter, it’s going to be hell for a lot of people,” said 18-year-old Dailen Yackobeck.

Yackobeck chained himself to City Hall’s doors shortly after the lockout began. He said he will not leave until buses are back up and running.

“If the city continues to do this, I am going to stand here as long as it takes.”

Both the city and Amalgamated Transit Union 615, which represents the city’s bus drivers, spent the day Saturday at the bargaining table but were unable to beat the 9 p.m. lockout deadline. The two sides are far from reaching a deal, each said.

The city said the union upped their desired wage increase during the latest talks.

“They are now asking for much more than what they were willing to settle for in December 2013. They now want a 22.25 per cent wage increase over five years. This is more than double what the other eight unions accepted,” said Marno McInnes, the city’s director of human resources.

The union said the increase is not as dramatic as the city claims and will put transit workers’ wages closer to wages in other western Canadian cities.

“However the city wants to twist it,” said union president Jim Yakubowski, “the truth is 65 cents an hour is what we’re asking for in the third year and a dollar an hour the fourth year over and above the 10 per cent they’ve offered everybody else.”

The city’s lockout notice came Thursday after 11 months of failed contract negotiations and the union’s rejection of the most recent contract offer.

Ninety per cent of union members rejected the city’s offer last month. The offer included a 10 per cent wage increase over four years, retroactive back to January 2013, but also proposed changes to the defined pension plan.

The changes included an increase in contribution rates and changes to how earnings are calculated — changes the union said they’re not prepared to accept.

The city has pointed out several times since negotiations began to falter that no other civic union, except the transit union, rejected the pension proposal. Eight out of nine unions approved the contract.

City council will discuss the pension issues at a special meeting Monday, the city solicitor wrote in an email. Passing a bylaw to implement pension changes for all city unions will be on the agenda, the email read.

The transit union said the meeting’s agenda will simply impose the pension plan upon them.

Transit workers have been without a contract since December 2012.