Meet the duo looking to keep the Vanscoy Arena alive

Meet the duo looking to keep the Vanscoy Arena alive

Dean Sanders is used to spending plenty of time at his local rink.

The miner from Vanscoy has spent his entire life in the small community of roughly 500 people.

Without a minor hockey program, Vanscoy's natural ice arena -- or Shiverdome, as it's known -- has fallen into disrepair over the past 10 years with a small and mighty volunteer workforce spending their free time making sure the rink is operational.

As Sander hauls a garden hose across the ice to begin another layer of flooding, he said he hopes this isn't the last time he's able to bring the arena to life.

"I know my fiance is quite frustrated with me because I'm up here -- if not every night, every other night until we get the ice surface going and stuff, which we're really close to now," he said.

Sanders is a member of the Vanscoy Chiefs, the local senior hockey team who have been unofficially operating the rink for the past eight to 10 years with an agreement with the town.

The town covers insurance and utility costs while the Chiefs run the day-to-day operations at the arena, which allows them to pocket any rental or revenue dollars. 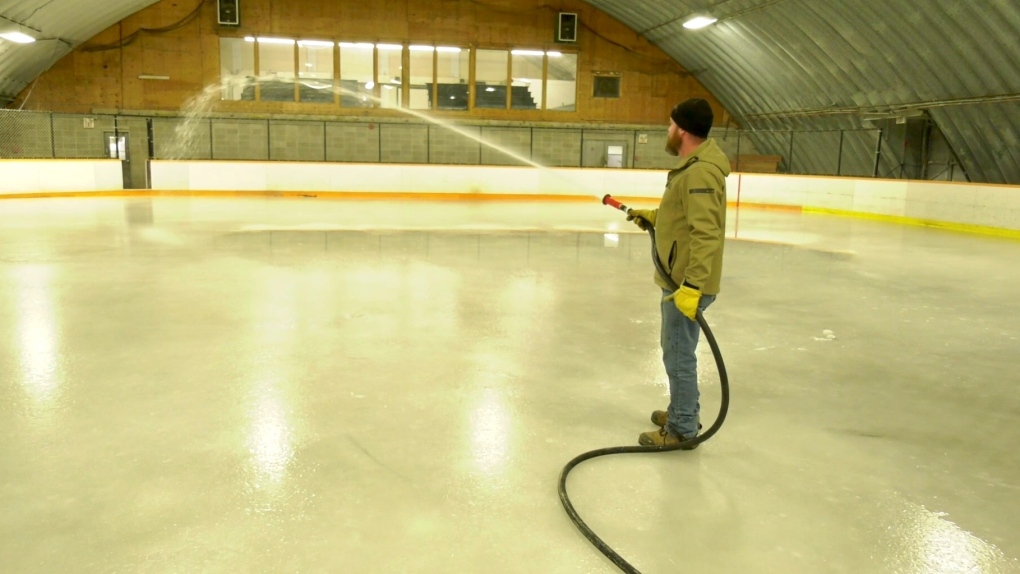 Except with COVID-19, rentals have fallen off as repair costs have spiked with ductwork and a new furnace needed last year.

At first, many of the repair costs were split evenly with the town but as more and more repairs pop up, Chiefs players are increasingly paying out of pocket -- and there's little money left.

"There's some electrical work that needs to be done, a little bit of roof repair, and then in the mezzanine, some drywalling and a lot of cleanup," Sanders said as just some examples of the growing list of repairs needed.

"We've kind of tapped ourselves out."

Jenna Rolston is the fundraising organizer looking to find money anywhere she can. While nearby companies like Nutrien have given $2,000 to help upkeep the arena, Rolston said the need for more money is dire.

The duo recently received a massive marketing boost thanks to a short video circulating on TikTok. The Vanscoy Chiefs account shared the roughly 20-second video showing various members of the Chiefs doing odd jobs around the arena to get it going for another winter.

The video has been viewed nearly 225,000 times and quickly became the buzz of the town.

Sanders isn't one to spend much time on social media. He was blown away by the response to the video.

"I had no clue it would get those kinds of numbers," he said.

In addition to offering plenty of available rentals for practices, games or tournaments, Rolston also runs a skating school each new year with roughly 45 youngsters.

Losing the ability to share this prized piece of local history with the next generation is something Rolston or Sanders aren't willing to accept.

"As soon as you lose that, you lose that ability to attract new people to the town. You then have to go travel for hockey, for skating, for anything -- and you no longer have that place where everybody can come to be together," Rolston said.

Sanders has spent so much time at the rink over the years that it could be his second home.

From upkeep to late nights after Chiefs games or opening the rink early for a hockey team renting the ice, he's seen the arena go from a vibrant centre of social activity to a dilapidated shell of its former self.

As he rolls up the garden hose after another round of flooding the ice, he hopes kids in town can make similar memories.

The federal Liberals are withdrawing an amendment to their guns bill that introduced a controversial new definition of an assault-style weapon. The amendment would have defined what kind of firearms should be banned in Canada and added dozens of new semi-automatic rifles and shotguns to the list.

China: Balloon over U.S. skies is for research, wind pushed it

China said Friday that a balloon spotted over American airspace was used for weather research and was blown off course, despite U.S. suspicion it was spying. The discovery further strained already tense relations between Beijing and Washington.

2 gang members arrested in California shooting that killed 6, including baby

Two gang members suspected in the massacre of six people last month in central California were arrested early Friday, one after a gun battle, the Tulare County sheriff said.