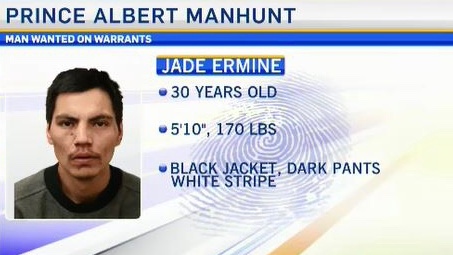 Residents both west and north of Prince Albert can expect to see a heavy police presence as the search is on for a suspect wanted on outstanding warrants.

RCMP is searching for 30-year-old Jade Ermine. He’s described as standing 5’10” and weighing around 170 pounds. He was last seen wearing a black jacket and dark pants with a stripe.

The search for Ermine started around 2 p.m. August 20th. RCMP says an officer was injured and taken to hospital with non-life threatening injuries.

Police are asking the public to be alert and respect directions given by officers on the ground. Anyone who believes they’ve seen Ermine is asked not to approach, and to call police immediately.