'It's not surprising': a recent study names Prince Albert as the greenest city in Canada

'It's not surprising': a recent study names Prince Albert as the greenest city in Canada

A new study by the real estate site Calgary.com has listed Prince Albert as the greenest city in Canada.

The score is based on parkland, green area, and community gardens each city has.

“It’s not something that we weren’t … aware of but it’s nice to have it confirmed now,” said Tim Yeaman, Parks and Open Spaces manager with the City of Prince Albert.

“It certainly highlights what we’ve known for quite a while but also where our focus has been on the last several years in regards to investment in those park spaces.” 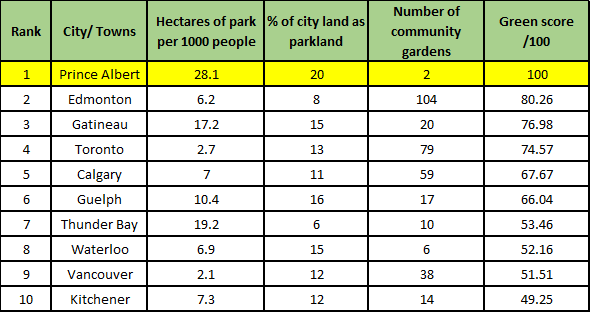 Greenest cities in Canada according to a study done by Calgary.com

“When we take a look at park space and we take a look at what we specifically have in Prince Albert, we’re uniquely situated. We’re on the edge of the boreal forest and we maintain a lot of park space, not just our big parks but also our pocket parks or neighborhood parks. That’s where community has really spoken up and said ‘hey, this is of value to us,’ ” said Yeaman.

The owner and manager of an outdoor sporting goods store in Prince Albert says he is happy about the recognition the city received.

“It’s not surprising, we’ve got tremendous amount of greenspace which we are very fortunate to be a part of and use frequently with our business,” said Mike Horn, Owner and Manager of Fresh Air Experience in Prince Albert.

““It’s very neat to have that amount of trail and space. We really have to market ourselves as an outdoor adventure city because that’s what we have to offer.”

The use of park spaces increased during the pandemic with people turning to nature for comfort.

“When you’re talking about mental health and you’re spending a lot of time in your home, those green spaces became very important connection points for people,” said Yeaman.

With a lot of parkland to use, citizens of Prince Albert indulge in different recreational activities all-year round.

“My big background is cycling. So I grew up mountain bike racing out in Little Red River Park; cross-country skiing, snowshoeing; alpine skiing on the hill,” said Horn.

Prince Albert is the only Saskatchewan city to make it to the list. The city is committed to maintaining the parkland and adding more in the years to come.

“I think the City of Prince Albert itself is on the right track,” said Yeaman.

“We want to continue being industry leaders and continue to encourage play within our parks throughout the province.”