'He loved that girl': Murdered Humboldt man's family claims he died over romance

HUMBOLDT - - The family of a Humboldt man who was abducted and killed last month claims their son’s troubles began after he met a girl.

Allan Douglas Garrioch, who went by Allan Glasier, disappeared Feb. 25. Human remains were discovered by RCMP in the RM of Bayne on March 2. An autopsy later confirmed it was Glasier.

Five people are facing charges in relation to his death. Tristan Daniel Morrison, 21, along with 21-year-old Brettin Andrew Veilleux-Pelletier, and 42-year-old Steven Veilleux are charged with first-degree murder. Joshua Dominic Canevaro, 23, and 40-year-old Jodie Lynn Veilleux have been charged with kidnapping and forcible confinement.

Glasier’s family says after moving to Humboldt from Weekes, Sask. in September 2019, Glasier befriended Morrison and Veilleux-Pelletier, and began a relationship with Morrison’s ex-girlfriend, which the family alleges led to violence and threats against Glasier.

"People tried telling him, and he didn't care,” said Glasier’s stepfather David Glasier. “He loved that girl. And it was just all jealousy."

"They slashed Allan's car tires, we went to the police, they did nothing,” claimed Glasier’s mother Shannon Glasier. “They threatened to blow up his car, that was the car that was blown up here, they did it, we went to the police, nothing was done. Death threats numerous times, we took evidence in of the death threats, nothing was done. The outcome is my son."

According to his family, Glasier was staying at his older brother’s house in Humboldt when he was taken in the early hours of Feb. 25.

The family claims Morrison’s ex-girlfriend was in the house tied up with zip-ties, and that she sent his Glasier’s sister Shantelle Garrioch a message that morning.

"I actually got a message that morning stating that his house was broken into,” she said. “I went there at 7 a.m., and he (Glasier) wasn't there. Things were smashed and there was blood on his bed. I immediately phoned my mom and dad and asked if they had spoken to him or anything, and that's when it sunk in that it was real, and he actually was taken."

None of these allegations have been proven in court.

Glasier’s family says they’ve been a target on social media, receiving messages from an account with their son’s name.

"Somebody made a fake account of Allan Glasier and started snap chatting her,” said David Glasier, referring to Shannon Glasier.

“Snapping all his friends and saying, "Don't worry, I'm still alive" the day before his viewing,” said Garrioch. 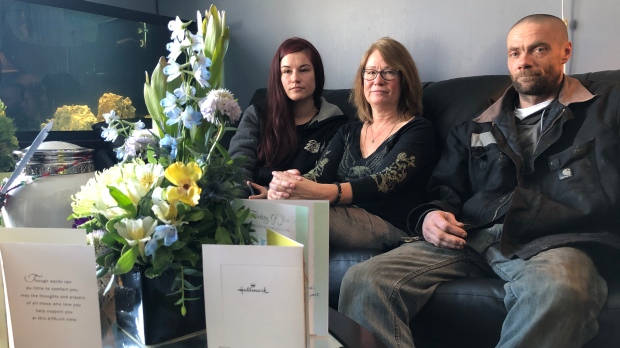 The family says they’re frustrated with the way it’s been handled by RCMP, claiming their son’s death could have been avoided.

"They had all the evidence,” Shannon Glaiser said of the RCMP. “They knew who it was doing it, and they could've stopped all of this. When it came to the death threats, they should've gotten serious, and they didn't."

"I'm angry, I'm pissed off,” said David Glasier. “It shouldn't be this way. We lost our son for no reason."

The next court appearance for Morrison is March 26 in Saskatoon.