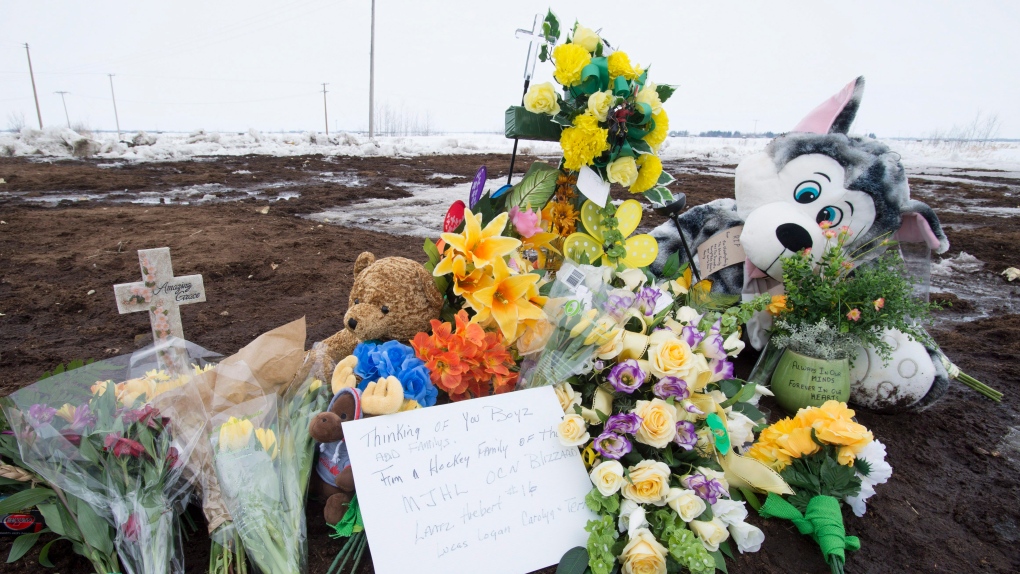 Flowers and teddy bears are seen at the intersection of a fatal bus crash near Tisdale, Sask., Monday, April, 9, 2018. (THE CANADIAN PRESS/Jonathan Hayward)

The GoFundMe page for the victims of the Humboldt Broncos bus crash has reached $10 million.

The company said Thursday the page, which was at $10.2 million as of 8 p.m., is one of GoFundMe’s three largest campaigns globally and the largest to date in Canada.

It was started April 6 by Humboldt resident Sylvie Kellington, with a modest goal of $10,000.

Nearly 120,000 donations — a record number for GoFundMe — from more than 80 countries have come in so far.

“Thank you to everyone for your kindness and prayers, your donations, and for sharing this GoFundMe far and wide,” Kellington wrote on the page.

The company said donations have come in from every Canadian province and territory as well as from as far as Europe and countries such as Australia, Peru, India and Japan.

The Broncos organization says it is overwhelmed by the support. It plans to work with financial advisors to figure out the best way to distribute the funds.

Sixteen people died and 13 were injured in the crash.

The Broncos bus was travelling to Nipawin for a playoff game against the Hawks with it collided with a tractor-trailer on Highway 35 near Tisdale.