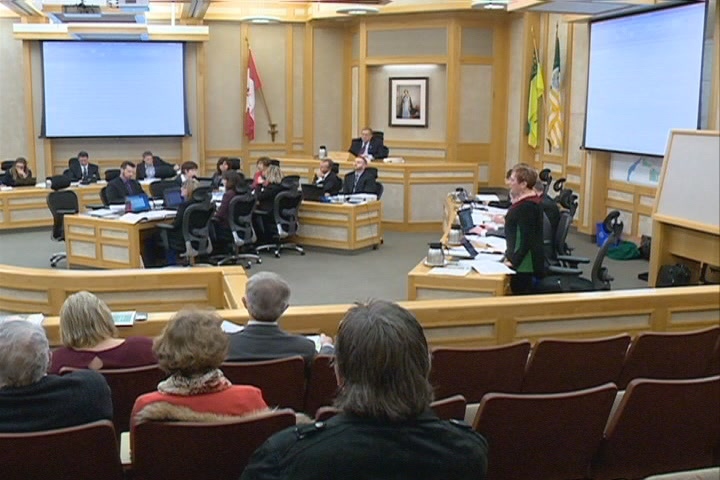 Saskatoon residents will see property taxes rise at least 4.29 per cent next year.

City council approved increases to its road maintenance, snow and ice management, and street cleaning budgets with little debate Tuesday to close out day one of the city’s 2014 budget meeting.

The increases will lead to a 4.29 per cent hike in property tax — or a $62 annual increase for homeowners whose property values $325,000, the average market price based on 2013 numbers.

Mayor Don Atchison said following the five-hour meeting that councillors were debriefed on the road maintenance, snow clearing and street cleaning budgets during Monday night’s council meeting and that he wasn’t surprised the items were approved so quickly.

“They were prepared for it, and really, they’ve all heard the same thing,” Atchison said of the councillors. “The citizens have spoken about the roads.”

The increases will be used to hire more workers to patch potholes and clear snow, to provide two city-wide snow clearings, to improve street sweeping during the spring and to better regulate street cleanings.

“People want to see what they’re getting for their taxes,” Atchison said.

The 4.29 per cent increase is the bulk of a proposed 7.26 per cent hike in property taxes. The remainder of the hike, which includes items such as the police budget and civic operations, will be debated Wednesday at day two of the budget meeting.

The 4.29 per cent hike came after much debate on raising the price of riding a city bus without a pass. The current cash fare is $3. Saskatoon Transit administrators requested a $0.10 increase, claiming it would bring in nearly $70,000.

The item, which included increasing the cost of bus passes, was approved despite several councillors noting their disapproval of the $0.10 increase.

“If we want to get more people on the bus, we need to make it as easy as possible,” Ward 2 councillor Pat Lorje said during debate.

Council will review the remainder of the 2014 budget Wednesday.

Other budget numbers approved Tuesday included $471,000 to improve the city’s website, $1 million to help with Gordie Howe Bowl upgrades, and $150,000 for a service review.