The Saskatoon Blues: A wild dream that almost became real

SASKATOON -- In the early 1980s Saskatoon faced the possibility of an NHL team coming to town - until the NHL put an end to what many thought was a crazy idea from “Wild” Bill Hunter.

Hunter, originally from Saskatoon, had bought the St. Louis Blues. He had the stadium planned, merchandise made, season tickets sold, and he even had Don Cherry ready to coach.

"Don was going to come to Saskatoon and promote the idea of hockey in Saskatchewan. He had everything set up. Unfortunately he wasn't on the best of terms with some of the NHL owners," said Kyle Burgess, a producer at Campfire Stories, a local production company making a documentary on Hunter.

Hunter’s dream was crushed in a 15-3 vote from the NHL Board of Governors against letting him move the team. Hunter was instrumental in helping to found the controversial World Hockey Association in the early 1970s, creating a rival for the NHL and removing the old way contracts were written, allowing the first ever contract over $1 million.

"I would say absolutely it was decided before they went," Hunter’s son Bart said, convinced his father's past had a big role in the decision.

"You know the stories that I heard not only from my father but the other people that were there, the other ownership group, that people were snoring, that people weren't even paying attention to their presentation and it was embarrassing." 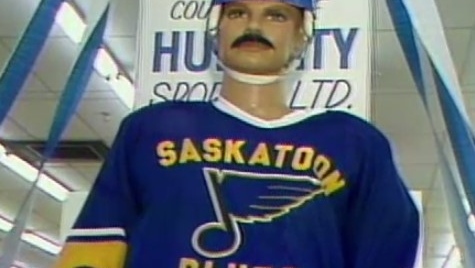 According to Burgess, the big argument was that Saskatoon was simply too small. When hard times hit the NHL in the mid-1990s, three teams moved to different cities with the Quebec Nordiques in 1995 becoming the Colorado Avalanche, the Winnipeg Jets in 1996 becoming the Phoenix Coyotes, and the Hartford Whalers in 1997 becoming the Carolina Hurricanes.

"At that point 150,000 people and they have millions of people, how would we support that," Burgess said. "There is the counter argument to be made that one of the most successful football teams in the world is the Saskatchewan Roughriders, look at their merchandise sales."

Businessman Harry Ornest eventually came in at the last minute to buy the Blues, successfully keeping them in St. Louis and even turning a profit when he sold the team years later.

According to Bart, Hunter took the failure hard, but he wasn’t one to sit around and feel sorry for himself. Hunter died of cancer in 2002.

"Like anybody he would get down and get depressed, but he had the ability to put on a game face and get out there," Bart said. "It was a dream, it was a dream that now came crashing down. I don’t care who you are - if you if you're involved in hockey and love hockey it’s a dream to be in the NHL, and that was his dream, that was his way to the NHL."