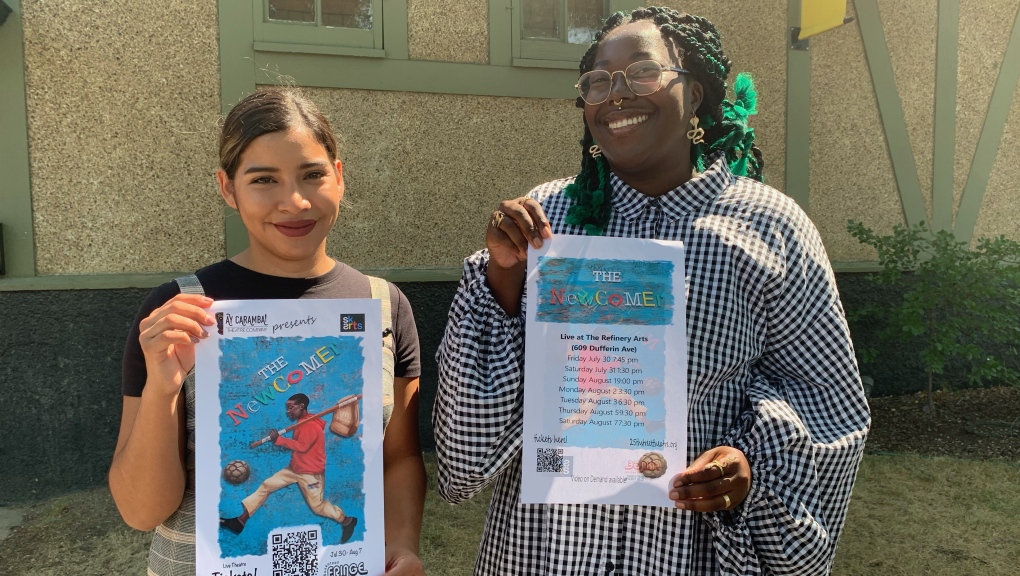 Yulissa Campos and K.P hold up posters advertising "The Newcomer."

SASKATOON -- A Saskatoon man’s refugee story from South Sudan is the inspiration behind the plot of a play called “The Newcomer” that will be featured at the Fringe Festival.

Yulissa Campos is the artistic director of Ay, Caramba! Theatre Company that is putting on the play and says her friend reached out to her wanting to portray his story on a stage.

The one-man show follows a man who leaves South Sudan because of the civil war looking at a second chance at life in Canada. At 17-years-old, the United Nations High Commissioners for Refugees (UNHCR) brings him to Canada where he faces many challenges being a newcomer.

Campos hopes to emphasize the importance of diversity and representation in Saskatoon through the play.

“The immigration here is increasing every year...we have a diverse community and these are stories that are not really found in regional theatres and that’s why it’s important for the community to see it,” Campos said.

Campos says the play was supposed to hit the stage in 2020 but was stalled due to the COVID-19 pandemic. Now that the show is selling tickets and will be hitting the stage soon, Campos says it’s “surreal.”

“We’re very excited to welcome people to experience live theatre because we’re missing so much even though we’ve seen a lot of livestream plays, it’s not the same as having that human connection on stage,” Campos said.

K.P Dennis who is directing the play says they’re really excited to put the story on stage in an “open and honest funny way.”

“The main character is very funny and sweet but has had so many things happen to him. I think it’s a really beautiful show for the audience to experience different types of humanity and people,” they said.

Dennis says “The Newcomer” will always be livestreamed online as they’ve had people from Vancouver and Toronto wanting to see the show.

However, Campos hopes people will come out and support the play in person as it’s been a “rough year” for the arts.

“The Newcomer” will be live at The Refinery Arts on 609 Dufferin Avenue. The show will run from July 30 till August 7 and tickets can be purchased online.