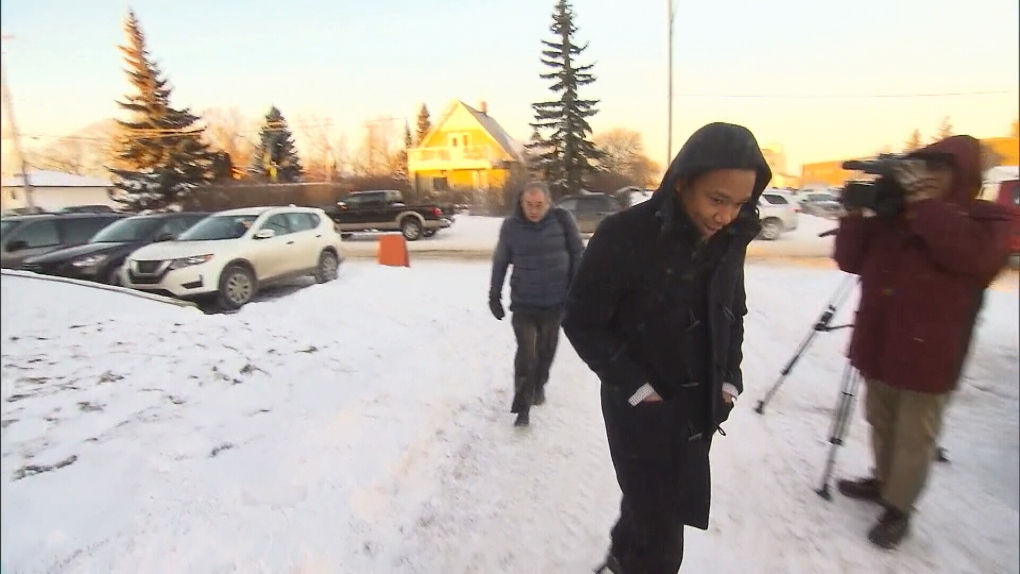 Eric Meechance enters Court of Queen's Bench in Battleford, Sask., on Wednesday, Jan. 31, 2018, ahead of his testimony at the trial of Gerald Stanley.

A relative of Colten Boushie with him and three others the day the 22-year-old was fatally shot was adamant Wednesday the group never pulled out a gun while they were on the farm of Gerald Stanley.

Eric Meechance, who testified the five drove onto the the Biggar-area Stanley property in an SUV on Aug. 9, 2016, took issue with defence lawyer Scott Spencer describing the group as armed.

“I wouldn’t say armed,” the 23-year-old said. “That gun wasn’t whipped out anytime on that farm.”

The group had spent the day target shooting, from inside the SUV, using a rifle, drinking Crown Royal, and swimming in a river in the area, Meechance said.

The SUV hit a culvert after they left the river, which Meechance said caused a problem with one of the tires. The group kept driving, however, and eventually drove onto a farmyard about 15 to 20 kilometres northeast of the Stanley property, according to Meechance.

One of the members of the group — Cassidy Cross, according to Meechance — attempted to break into a red truck on the property using the same rifle as the one used for target shooting, before the group moved on to the Stanley farm.

Meechance said most of the group, including Boushie, had fallen asleep. He alleged Cross, once on the Stanley property, jumped onto an ATV in the yard but that the quad didn’t move “a foot.” He said he heard someone yell and swear at him and Cross, and he said, after the two were back in the vehicle, the windshield was smashed. Stanley’s son, Sheldon, testified he hit the window with a hammer.

The SUV was unable to gain any traction because of the tire — which photos show was down to the rim. The vehicle hit a parked vehicle on the property, at which point Meechance testified he and Cross ran.

“Then I heard two shots, and I swear they were towards me,” he said.

Meechance was adamant during his testimony the group was not on the Stanley property to steal anything.

He asked Meechance if he told Boushie’s family the group was looking into vehicles before the shooting.

“Don’t you think the family deserves the truth… about what you were doing before?” Spencer asked.

He asked why Meechance never mentioned in a police interview that the group was target shooting, to which Meechance replied he’s court ordered not to use a gun.

Spencer mentioned a break-in at a liquor store the night prior to the shooting.

“Did you break into a liquor store the night before?” Spencer asked, which Meechance denied, saying he was at his grandmother’s house.

He also suggested Meechance was the member of the group who hopped on the ATV on the Stanley property, not Cross.

His son, Sheldon, testified Wednesday he heard three gunshots before seeing his dad standing beside the SUV and holding a gun. His dad appeared as if he would be sick, according to Sheldon.

“I don’t know what happened. It just went off. I just wanted to scare them,” Gerald said, according to his son.

Boushie was shot once, court heard Tuesday. The fatal shot entered behind his left ear and exited through the side of his neck.

A rifle, missing the stock, fell out of the vehicle when two women in the back of the SUV exited and pulled Boushie’s body out, Sheldon testified. Boushie’s blood was on the rifle, according to Sgt. Jennifer Barnes, a blood-stain-pattern analyst.

Meechance never clarified if the rifle found by Boushie’s body was the same as the gun used for target shooting.

Spencer showed Meechance a photo and asked him to identify the rifle on the ground near Boushie, but Meechance became upset, stating he didn’t want to look at the photo of Boushie’s body. He asked why he wasn’t shown a photo of just the rifle.

Justice Martel Popescul ordered a break in court proceedings after Meechance kept his head down, upset. When court resumed, Spencer did not further question Meechance.

Three spent gun casings found at the scene — two located outside the SUV and one found inside the vehicle, on the dash — matched a Russian-made Tokarev handgun located inside the Stanley home, according to Crown prosecutor Bill Burge. Boushie’s DNA was on the gun and gun residue was found on Gerald’s hands.

Eleven guns were found inside the Stanley home — two of which were pellet guns — and a number of corroded shell casings were found on the property.

One RCMP officer testified Tuesday 17 live rounds and 11 spent gun casings were found inside the SUV, and another said Wednesday he believes a stock found at the farm near the Stanley’s property matches the one missing from the rifle.

The trial is scheduled to run until Feb. 15.

--- Written by Kevin Menz, based on reporting from Angelina Irinici and Melanie Nagy