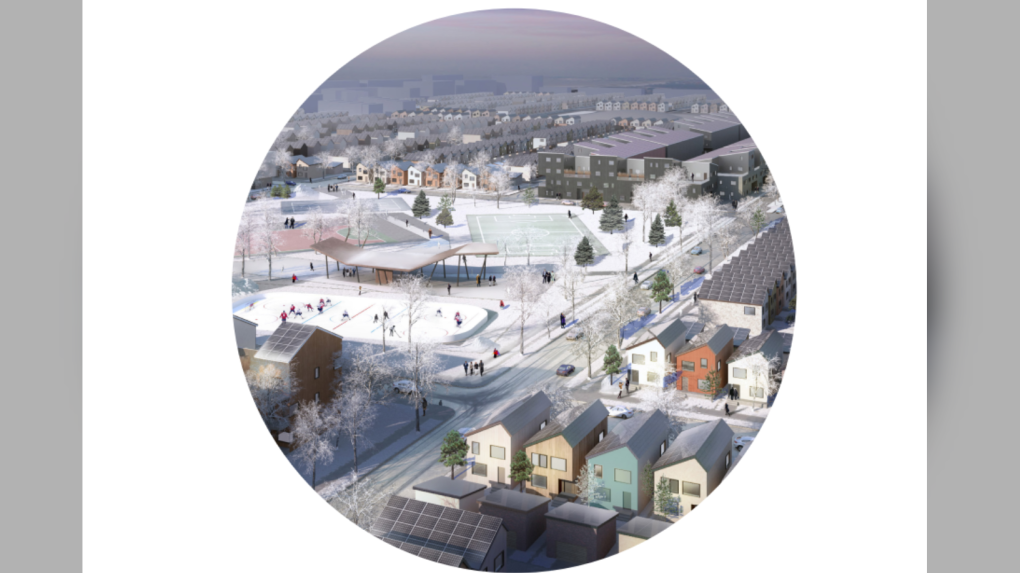 A concept drawing of Solair, a proposed development near Saskatoon. (Arbutus Properties)

Today, it's just 238 acres of farmland southeast of Saskatoon. If Arbutus Properties gets its way, that land will one day see 7,200 people living in Solair, "a sustainable suburban neighbourhood unlike any in Canada.”

"Solair offers a unique opportunity to demonstrate for all urban and rural municipalities in Canada, who are also experiencing rapid growth, that there is a different way to develop: to be greener, to minimize the impact of the built form, to de-emphasize the automobile, to provide more pedestrian and bike-oriented living, to deliver localized small scale retail and live/work environments, and to build a community with a strong sense of identity which is in alignment with the natural environment. And to do so within a regional setting and scale," Arbutus said in a letter to the RM of Corman Park council.

Arbutus, the developer behind The Meadows development in Saskatoon and a proposed grocery store and restaurant at Midtown Plaza, is scheduled to make an in-camera application for development review and approval to the RM council on Monday. The land is adjacent to the CP Rail tracks east of The Meadows in Saskatoon.

Solair is the answer to urban sprawl, the group said in its letter.

"It fills a missing piece in the Saskatoon region by providing a choice for those looking to blend urban and rural lifestyles in a regional setting. Solair will be the most dense residential development in Corman Park's history and will provide sustainable infrastructure to support it. This density will create a strong sense of community and meet ambitious sustainability objectives. Now is the time for Corman Park and its partners in the metropolitan area to lead." 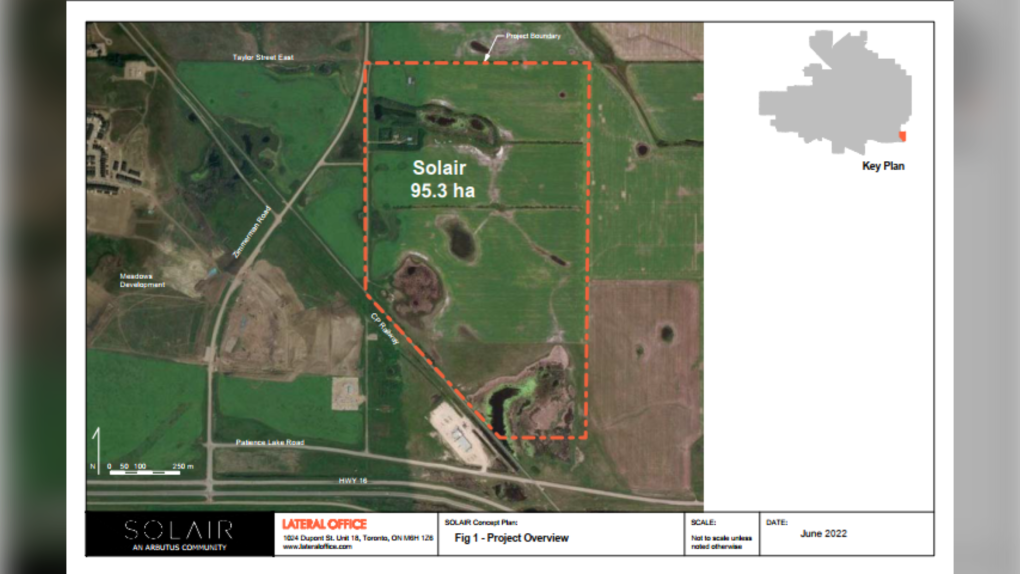 The proposed location of the Solair development. (Arbutus Properties)

The proposed location of the Solair development. (Arbutus Properties)

Solair is based on energy-efficient design at the scale of both individual buildings and the whole community. Nothing like it exists in Saskatchewan and it will be the largest development of its kind in Canada, Arbutus said.

For example, alongside energy-efficient building construction, plans include a community-wide distributed solar panel system at a utility scale (15 MW) to serve the electrical needs of the entire neighbourhood and be integrated into the SaskPower grid.

"Saskatchewan municipalities have all adopted sustainable growth principles and low impact development standards, and have talked about this kind of development initiative for a long time," Arbutus wrote in its concept plan.

"Unfortunately, there are few to no examples on the ground, built to scale. Solair offers a critical opportunity for proof of concept, demonstrating that such development is entirely doable, economically viable, environmentally performative, and desirable to the market."

Arbutus proposed a private-public partnership model to build Solair, in which Arbutus would be responsible for the initial capital construction cost with the RM covering operation and maintenance after it's built.

Arbutus is set to prepare a budget showing that tax revenues will offset the annual cost of providing urban municipal services to the Solair community.

Arbutus expects the approval process to take about two years and plans to receive development permits in 2024.

Ontario doctor alleged to have killed 4 people around same date in 2021: documents

Transport Minister Omar Alghabra told the House of Commons transport committee the COVID-19 pandemic and resulting labour shortages are to blame for the significant wait times at Canadian airports, and said the ArriveCAN app is here to stay.

Retailers sitting on 'mountains' of excess inventory in need of liquidation: expert

Consumer behaviour, a looming recession and the reactions of retailers to pandemic-driven supply chain issues are combining to drive a liquidation renaissance, according to one business advisor and retail futurist who spoke with CTVNews.ca.

Prime Minister Justin Trudeau nominated Ontario judge Michelle O'Bonsawin to the Supreme Court of Canada on Friday. She is the first Indigenous person chosen to sit on Canada's top court and the appointment is being celebrated as filling an important role at the highest level of the country's justice system.

A 81-year-old Danish woman traveling from Africa to Canada was arrested at Warsaw airport on suspicion of illegal possession of heroin worth over US$515,000, officials in Poland said Friday.

A prominent Quebec cardinal is denying sexual assault allegations against him contained in a class-action lawsuit that was formally filed this week in Quebec Superior Court.

Two pilots are believed to have fallen asleep and missed their landing during a flight from Sudan to Ethiopia on Monday, according to a report by commercial aviation news site Aviation Herald.

Back to school: A look at the COVID-19 rules in place across provinces, territories

As students across Canada gear up to enter what will be their fourth academic year in the pandemic, CTVNews.ca takes a look at what measures will be in place in schools, by province and territory.