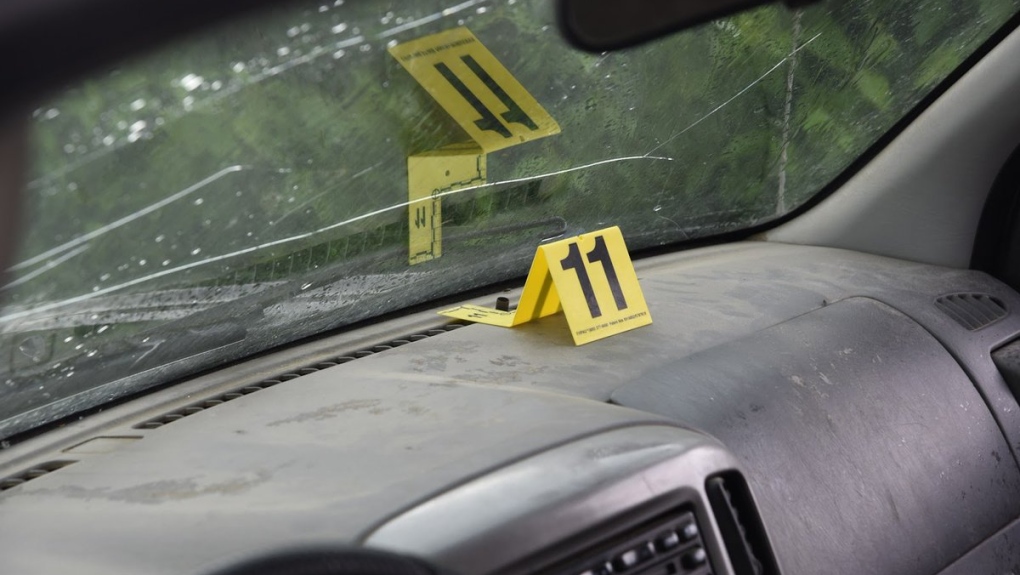 A photo part of the Crown's exhibit at the second-degree murder trial of Gerald Stanley shows a shell casing, from a Russian-made Tokarev handgun the Crown alleges Stanley fired three times, on the dash of an SUV Colten Boushie was in. (court exhibit)

Photos released to media Wednesday are shedding more light into the investigation of Colten Boushie’s killing.

The Crown exhibits, shared on day two of testimony at Gerald Stanley’s trial, show spent casings found at the scene, aerial photos of the Stanley farm, a damaged SUV, a broken rifle, an ATV and several firearms — including some found on the Stanley property.

The Crown alleges one gun shown — a Russian-made Tokarev handgun — was fired three times by Stanley. One photo shows a shell casing matched to the handgun on the dash of the SUV. Another photo shows a black case in which RCMP say the handgun was found inside the Stanley home.

Colten Boushie was fatally shot while in the SUV’s driver’s seat, according to Crown prosecutor Bill Burge. He said Tuesday that Boushie was shot once. The fatal shot entered behind Boushie’s left ear and exited through the side of his neck.

Stanley has pleaded not guilty to second-degree murder in the death.

His son, Sheldon Stanley, testified Wednesday he heard three gunshots before seeing his dad standing beside the SUV and holding a gun. His dad appeared as if he would be sick, according to Sheldon.

“I don’t know what happened. It just went off. I just wanted to scare them,” Stanley said, according to his son.

The SUV — which Sheldon said drove onto his family’s property Aug. 9, 2016 — is visibly damaged in the photos. One tire is ripped down to the rim; the body is dented; and the windshield is smashed.

Sheldon told court he used a hammer he was carrying in a tool belt to hit the windshield as the SUV attempted to drive away. Gerald kicked the taillight, according to his son. Sheldon said he’d come to the conclusion someone in the SUV was attempting to steal his family’s property after he saw someone jump onto an ATV in the yard and start it.

Some photos in the Crown’s exhibits show the ATV. Other pictures show police markings of tire tracks near the all-terrain vehicle and on the Stanleys’ gravel driveway.

Sheldon told court two women who were in the vehicle after the gunshots exited and pulled Boushie’s body from the SUV. A rifle, missing a stock, fell out of the vehicle when the women pulled out the body.

The gun is shown in the photos on the ground as well as after it was seized by RCMP. A live cartridge from the rifle and five cartridges from the built-in magazine are shown in some of the images.

Eric Meechance, who testified Wednesday he and four others, including Boushie, drove onto the Stanley property before the fatal shooting, said the group had been target shooting from inside the SUV earlier in the day. He didn’t clarify if the gun used in the target shooting was the same as the rifle found near Boushie’s body.

Meechance said one man in the group also used the target-shooting rifle in an attempt to break into a truck on another property — before driving onto the Stanley farm. He noted, however, the rifle remained in the backseat while in the Stanleys’ yard.

“I wouldn’t say armed,” he responded, when Spencer described the group as armed. “That gun wasn’t whipped out anytime on that farm.”

Meechance said another member of the group jumped on an ATV on the property, but he told court the quad “didn’t move a foot.”

He also recalled the windshield being hit as the group attempted to flee. The SUV, which was unable to gain traction because of the tire issue, hit a parked vehicle, according to Meechance. He and one other member of the group ran from the scene as he heard two shots.

“I swear they were towards me,” he said.

The 23-year-old relative of Boushie found out about the death in an RCMP cell, after he was arrested, he testified.

Three weeks are set aside for the trial.

--- Written by Kevin Menz, based on reporting from Angelina Irinici and Melanie Nagy