A witness in Greg Fertuck’s murder trial on Friday rejected the defence’s suggestion that Greg and his estranged wife, Sheree, were reconciling.

Sheree was last seen leaving her family farm the afternoon of Dec. 7, 2015. While her body has never been found, Greg has been charged with first-degree murder.

Sheree’s semi-truck was found abandoned at the gravel pit where she worked near Kenaston, Sask.

Earlier in Greg’s trial, the defence suggested the couple had been working on reconciling. They had been separated for years at the time Sheree went missing.

Despite being separated, Decker said Greg was living at the family farm. He’d joke with Sheree about the two being romantic.

The defence has suggested Sheree had an enemy in her gravel hauling competitor – but Decker also went against that idea.

He said the two didn’t have any animosity towards each other, and wouldn’t even consider them “competitors” because they were both busy.

The day prior, a witness testified he “heard rumours” that she and the competing hauler didn’t get along because Sheree took over one of his contracts. 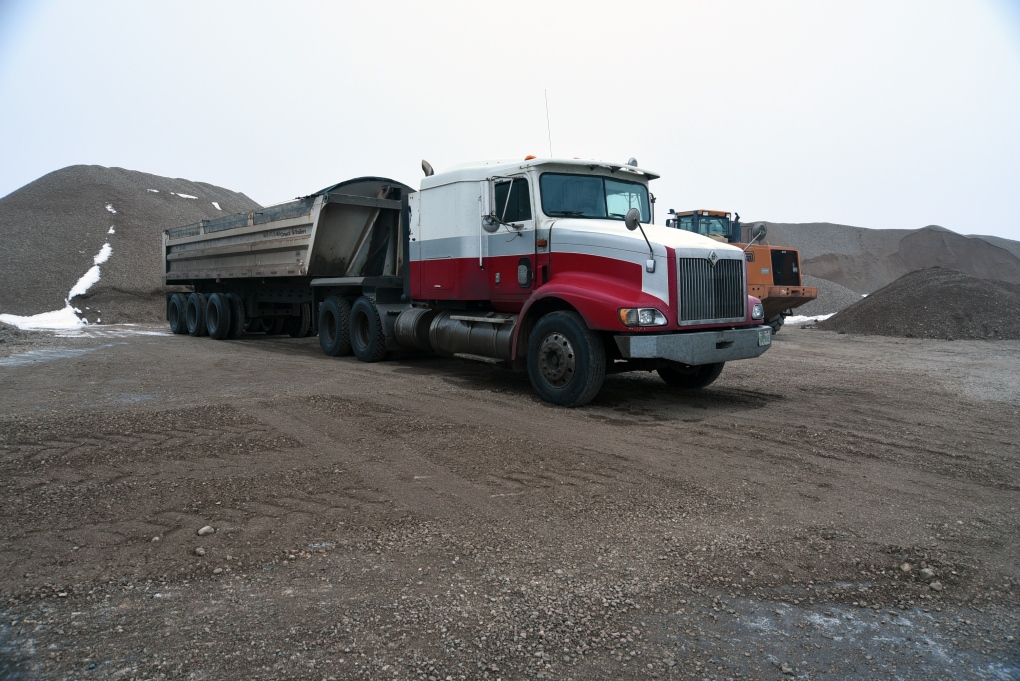 Sheree Fertuck’s semi-truck, seen here, was found in a gravel pit the day after she was last seen in December 2015. (RCMP supplied)

Decker last saw Sheree on Dec. 6, 2015 when she came over for a steak dinner.He testified Sheree expressed she was looking forward to babysitting her grandson next month.

When Sheree was deemed a missing person, the community banded together to search for her.

Pastor Eugene Whitehead, who worked with the volunteer fire department, helped with the search efforts.

Whitehead said he originally thought Sheree had slipped and fell into a collapsed pile of gravel.

An RCMP forensic investigator testified he thought Sheree was buried alive when he originally got to the scene.

Whitehead said he heard second-hand that people had seen Sheree’s truck driving at around 5 p.m. on Dec. 7, 2015.

The Crown argues Greg shot Sheree, used a loader to move her body into his truck and disposed of the corpse of a nearby field.

Earlier in the trial, the Crown said shell casings from a .22 calibre rifle were found at the scene.

On the day Saskatchewan asked the federal government for help to deal with surging COVID-19 hospitalizations, Premier Scott Moe granted the province could have acted sooner on a renewed mask mandate or proof-of-vaccination policy.

A gang that kidnapped 17 members of a U.S.-based missionary group, including one Canadian, is demanding US$1 million ransom per person, although authorities are not clear whether that includes the five children being held, a top Haitian official told The Associated Press on Tuesday.

A Metro Vancouver woman is looking for answers following the untimely death of her dog aboard a flight last summer.

A group of quick-thinking young men were forced to get creative by using their turbans as a makeshift rope to help rescue a pair of hikers in a Metro Vancouver park earlier this month.

'I'm heartbroken by this': Celine Dion delays opening of Las Vegas shows due to medical reasons

Just weeks before Céline Dion was set to return to the stage in Las Vegas, the Quebec superstar is delaying her show due to "unforeseen medical symptoms," her team said in a news release.