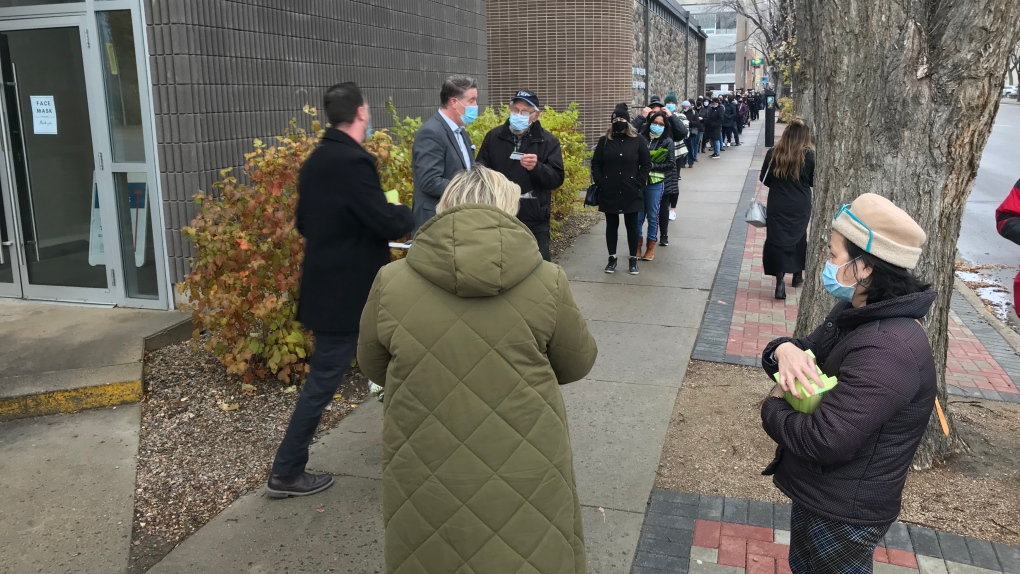 A long line formed outside the Saskatoon Chamber of Commerce on Tuesday. (Dale Cooper/CTV News)
Saskatoon -

A long line of people could be seen outside the Saskatoon Chamber of Commerce Tuesday morning, waiting to pick up rapid COVID-19 test kits.

"There was lots of interest for the rapid tests starting right at 8:30," Chamber CEO Jason Aebig told CTV News.

"We had an all hands on deck approach here this morning to distribution."

Chambers of commerce were among the locations the Saskatchewan government announced would be distribution points for rapid test kits. The kits are offered free of charge.

Fire halls are also among the locations that are offering the kits. However, the Saskatoon Fire Department opted out of the distribution program due to its COVID-19 protocols.

While the tests are not as accurate as those which use the PCR method, they can serve as a first line of defence for people wanting to have an idea of their COVID-19 status.

Results obtained through the self-administered tests can not be used as proof of a negative result under the province's COVID-19 vaccine mandate.

Aebig said the Saskatoon chamber aims to hand out the tests between 8:30 a.m. and 4:30 p.m. Tuesdays and Thursdays.

"We're told we will be restocked regularly. We're not sure what that looks like just yet," Aebig said.

Aebig said the chamber ran out of all 3,300 of their tests on Tuesday and doesn’t know when they’ll get more.

Tests were also handed out at Warman City Hall – with their supply of 3,500 tests, they are down by about 800 so far.

Warman Mayor Gary Philipchuk said he is glad they can help distribute the tests and give a sense of relief to some.

Warman dad Garett Mathiason has two kids, age two and six and wanted to get the tests for his family’s peace of mind.

“My six-year-old has a pediatric heart condition so he’s medically vulnerable as well, so testing is important for us to keep our family safe and others in the community safe as well,” Mathiason said.

Mathiason says this is the second box he’s picked up, planning to have the whole family take the test on Sundays so that they feel confident heading into the new week.