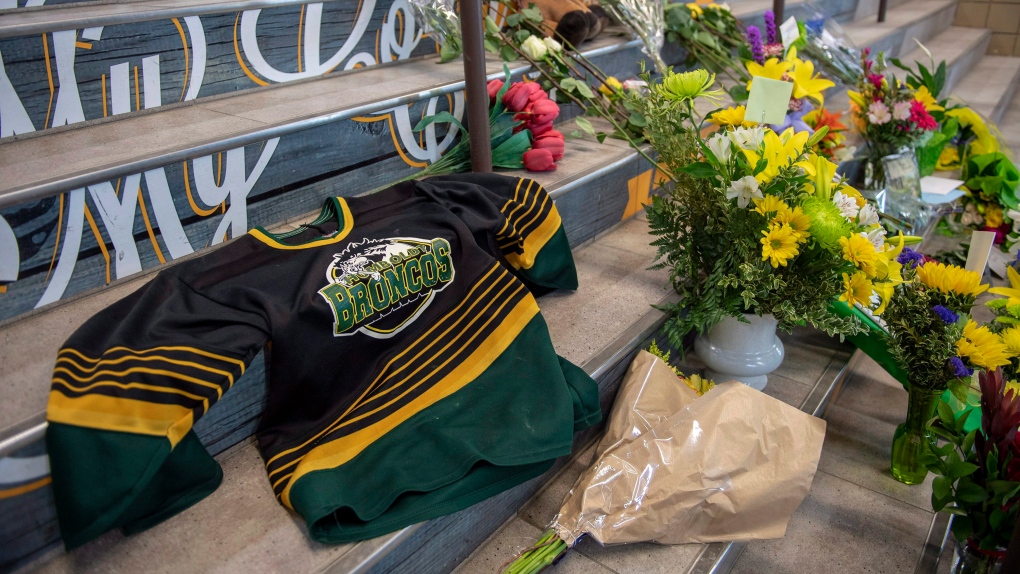 A memorial at the stairs that lead to Elgar Petersen Arena is shown in Humboldt, Sask., on Saturday, April 7, 2018. (THE CANADIAN PRESS/Liam Richards)

HUMBOLDT, Sask. -- A tragic bus crash that has sunk a Saskatchewan community into deep sorrow has also released an incredible display of human kindness as residents struggle to deal with their grief.

Sixteen people died, including 10 players, and another 13 were injured after a transport truck and the bus taking the Humboldt Broncos to a Saskatchewan Junior Hockey League playoff game on April 6 collided at a rural intersection.

The driver of the truck was uninjured.

People across Canada and from around the world have opened their hearts and wallets. A GoFundMe campaign for the victims and their families has surpassed $10 million -- one of the largest drives ever.

Humboldt's only florist has received hundreds of orders from as far away as Australia to send flowers to anyone and everyone affected by the crash.

The Canalta Hotel offered free rooms to family members travelling to the small Saskatchewan city after the crash, and provided food and support.

"People were phoning and making reservations and they're just crying and they can hardly get the words out," said hotel general manager Mary-Jane Wilkinson.

For Wilkinson the accident hit close to home. Her son Richard played hockey in Humboldt from the age of six.

"I've taken him to the hockey bus so many times to go on road trips, and put his equipment on buses and dropped him off," she said.

"That was really hard for me because the reality was it could have been my kid."

Restaurants have handed out free food. In one instance, an individual driving through a Tim Hortons bought coffee for the next 50 people in line.

Boston Pizza, a popular hangout for the team, immediately gave time off to staff who were friends with the players. Servers from other restaurants in the chain came to Humboldt to cover things off.

One of the managers, Rino Ferreras, said he wasn't surprised at the community support.

"Everybody knows each other, so everybody is giving their helping hands right away without thinking about getting anything in return," he said. "That's what they want to do -- give love and give help."

The food manager for the City of Humboldt said he has watched semi-trailers full of water, soda and edibles come into the Humboldt Uniplex every day.

"We want for nothing," said Alex Wilson.

Myles Shumlanski, whose son Nick survived the crash, said the public support has been unbelievable.

"Everywhere you go, everybody wants to help you out. Nick's keys for his vehicle got lost. One of his bosses just phoned (and said) 'We're going to drop him off a truck and a card key so tell him he's good.'

"Everybody just wants to help. They just wish they could do more. It's everywhere."

Former NHL player Sheldon Kennedy, who was with the Western Hockey League Swift Current Broncos and on the team bus when it crashed in 1986, said hockey is beyond important for small towns.

"You knew people were going to feel that they needed to help and give and show their support. In those communities the only way they can operate a hockey team is by everybody pulling on the rope."

"Even if you're not involved in hockey here ... it's all about the Broncos in this community."