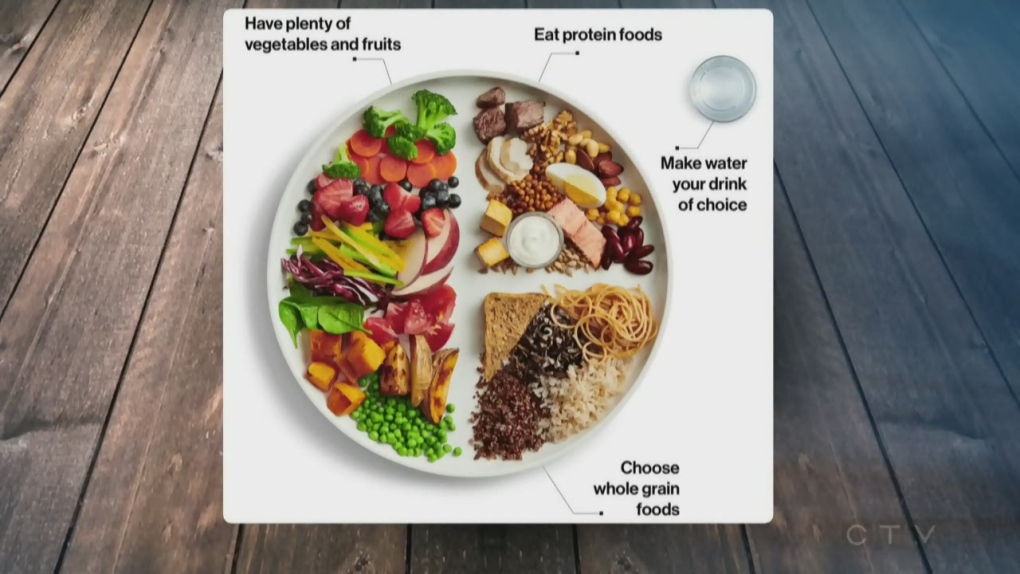 The overhauled food guide did away with traditional food groups and portion sizes and focused instead on broader guidelines, including eating more plant-based protein and drinking more water.

OTTAWA -- Conservative Leader Andrew Scheer faced strong criticism from nutrition experts on Thursday after he pledged to review the new Canada Food Guide should the Tories win power this fall.

Scheer, who spoke at an annual meeting of the Dairy Farmers of Canada in Saskatoon on Wednesday, said the process to craft the new version of the document released in January was "flawed" and that the guide needs to reflect what "science tells us."

The overhauled document did away with traditional food groups and portion sizes and focused instead on broader guidelines, including eating more plant-based protein and drinking more water.

At the Wednesday event, Scheer faced a question from a woman who identified herself as a dairy producer from British Columbia who asked for his stance was on the existing healthy-eating strategy and what dairy farmers can expect in terms of food policy in Canada.

"Absolutely, we are going to review that Canada Food Guide," Scheer said in response, adding there was a "complete lack of consultation" on the new version.

Video of his remarks was posted by CTV News and was verified by the Conservatives.

Health Canada says it began consultations in fall 2016 in a process open to Canadians and all stakeholders, including industry. The results were then published in a report.

The department also said its officials responsible for drafting the recommendations did not meet with food and beverage industry representatives to discuss the document -- a deliberate decision made in hopes of ensuring its dietary guidance was based on "scientific evidence and free from conflict of interest."

Dr. Yoni Freedhoff, a professor at the University of Ottawa who specializes in obesity, said that the only explanation for Scheer's comments, which he described as "intensely stupid," is that they are meant to curry political favour.

During his bid to become Conservative leader, Scheer garnered support from members of the dairy industry that helped him to edge out his main competitor, Maxime Bernier. Scheer won the leadership over Bernier by a whisker.

Freedhoff, who has been strongly outspoken about problems he's seen with previous versions of the Food Guide, said the newest version is by far the best one Canada has ever produced. He said it might be the best such guide in the world.

"It is biased in favour of health, evidence and science," he said in an interview. "And that is the way it should be."

Previous versions of the influential document were biased in favour of industry, Freedhoff said, adding former governments allowed industry to affect the process in a way that undermined public health.

While some Canadians might think of the Food Guide as offering guidance for grocery shopping, he pointed out that it's used by institutions such as schools, hospitals and long-term care facilities, where people have little control over what they get to eat.

On Thursday, Dietitians of Canada tweeted that the new guide is most definitely based on science, adding it encourages people to eat vegetables, fruits, whole grains and protein foods, including dairy.

The Canadian Digestive Health Foundation said Scheer's comments were not backed up or founded by any scientific data, adding it supports the current direction of Canada's Food Guide.

Health Minister Ginette Petitpas Taylor also issued a statement in response to Scheer that accuses him of "spreading lies" about the guide.

"Health policy should be based on evidence not industry, and meet the needs of all Canadians," she said.