Derivatives of the Delta variant, called AY.25 and AY.27, have been detected in Saskatchewan.

Dr. Saqib Shahab said there’s no data to determine if the Delta offshoots will be more transmissible than its parent strain.

"Do these sublineages transmit more rapidly than the original Delta strain? We are watching very closely. They may or may not," Shahab told reporters during a briefing on Tuesday.

Shahab said while it’s typical for strains to mutate, health officials are reporting information about the subtypes to the World Health Organization.

Angela Rasmussen, a virologist at Saskatoon's Vaccine and Infectious Disease Organization, said the AY.25 sublineage was first detected in Idaho.

"Whenever variants spread widely through a population, as it has done here in Saskatchewan and Alberta, it will acquire new mutations because that's what happens every time a virus replicates," Rasmussen explained.

"Essentially, it will become sort of a grandchild of the original variant that spawned it."

Rasmussen said modelling suggests the AY.25 may have a five per cent selective advantage compared to other Delta sublineages.

"That basically means that it can out-compete them when it's spreading through the population, but that doesn't indicate that it's more transmissible," Rasmussen told CTV News.

Rasmussen said vaccines are effective against the Delta variant and its new "flavours."

"So what people should take home from this is, if you're not vaccinated yet, you should go get vaccinated," she said.

A chart, shared at a physician town hall on Nov. 4, shows the AY.25 sublineage most dominant in Western Canada. 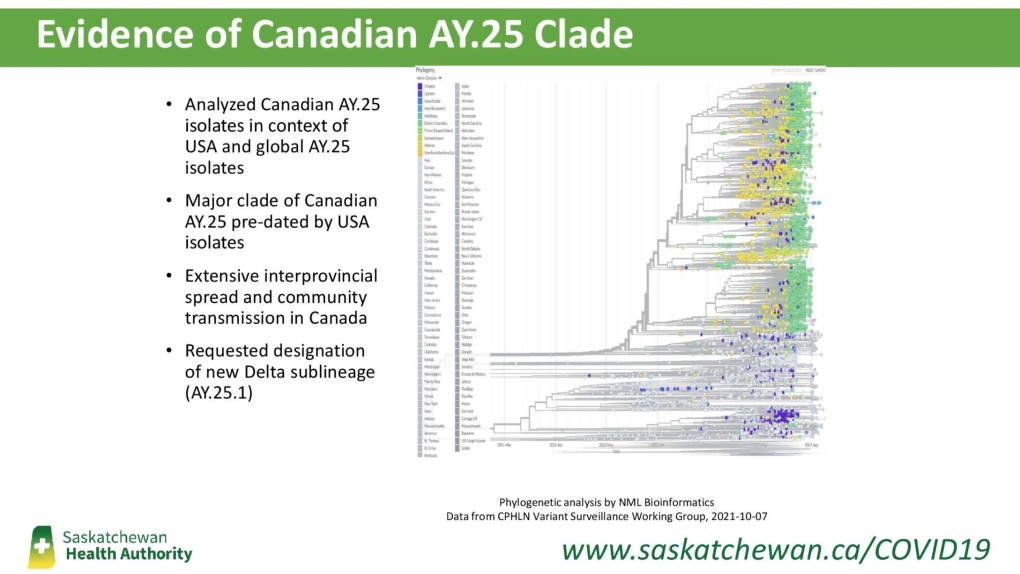 Angela Rasmussen, a virologist at Saskatoon's Vaccine and Infectious Disease Organization, said the AY.25 sublineage was first detected in Idaho.

“It’s no surprise that we are seeing higher prevalence of these sublineages of Delta in Saskatchewan and Alberta because that’s where most of the cases are,” Muhajarine said.

Shahab said he will share information about the AY.25 and AY.27 subtypes when it’s available.

A man who used a sword to kill and maim victims in Quebec City's historic district on Halloween night 2020 has been found guilty of murder.

Rising global temperatures could reduce the amount of sleep people get every year, according to a new study.