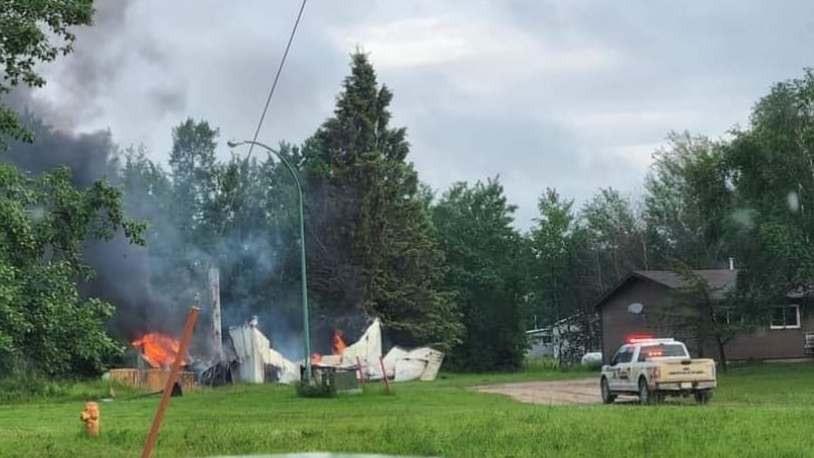 RCMP say they are investigating a fire that destroyed the Our Lady of Smiles Parish in Waterhen Lake. (Chris Martell)

A Saskatoon man whose family helped to build the Waterhen Lake Church is planning to help rebuild the church.

RCMP have been investigating what they’ve called “a suspicious fire” that destroyed the church earlier this week. They said no one was injured in the blaze.

However, Chris Martell believes the fire was a massive loss for the community.

He said that his great, great grandfather helped to build the Our Lady of Smiles parish in the 1950s.

Martell said he was baptised in the parish and was hoping to have his daughter baptised there too.

“We're all just devastated that the church is gone.”

Martel has planned a fundraising walk in August that would see him travel approximately 380 kilometres from Waterhen Lake to St. Mary’s in Saskatoon.

“The end goal for us is we just want to rebuild the church again, and, and all come together as it was when the first guys built it,” he explained. “They all came together and built it all as a community.”

Martell said surrounding communities and even some from Lac St. Anne in Alberta joined in to build the parish.

“So we'd like to do that again and as a community come together and rebuild it.”

The FBI searched former U.S. president Donald Trump's Mar-a-Lago estate as part of an investigation into whether he took classified records from the White House to his Florida residence, people familiar with the matter said Monday.

Condolences from Canadian politicians past and present poured out Monday as they learned about the death of Bill Graham, who served as foreign affairs minister when the country decided against joining the U.S. invasion of Iraq in 2003.