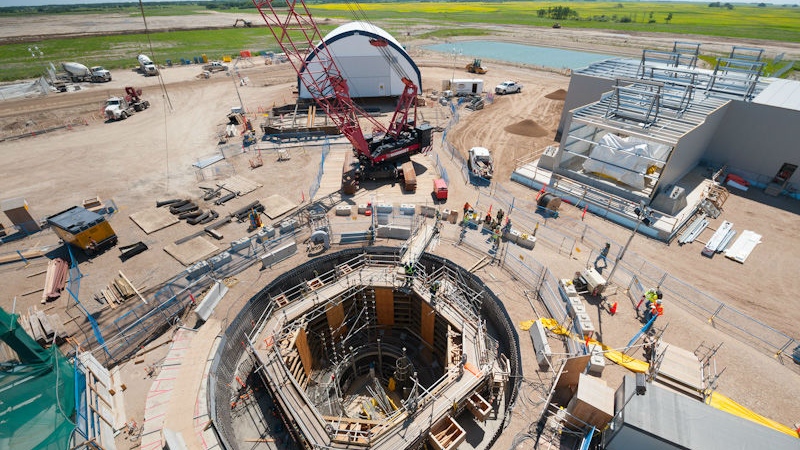 BHP Billiton says it will invest a further $2.6 billion US to finish preparing the Jansen potash project, bringing its total investment to approximately US$3.8 billion.

Australian mining giant BHP Billiton is delaying final approval for a potash megaproject in Saskatchewan, but the company says work will move ahead.

BHP (NYSE:BHP) said Wednesday that it's committed to 20 major projects with a combined budget of US$22.8 billion for the 2013 financial year, which runs until the end of next June. It said no other major project approvals are expected in the meantime.

That includes the Jansen mine, about 140 kilometres east of Saskatoon.

"A sanctioning event for the full Jansen project is not in the $22 billion that I have outlined," CEO Marius Kloppers said in a conference call.

"It is really beyond that, but they have pre-commitment capital that is going to keep them very busy and productively busy for the year that we talk about."

Potash is a valuable mineral mainly used in fertilizer.

Kloppers seemed optimistic about the future of the potash industry. He called it "a very good product for the long term."

"You will have seen near term ... where food prices are. We think that participating in the food production chain in an area where our core skill set fits is something that we would like to do over the next couple of decades."

BHP has already allocated $1.2 billion for what the Conference Board of Canada has estimated could be a $12-billion project. BHP itself has not publicly put a total price tag on the Jansen mine.

Saskatchewan Premier Brad Wall was also quick to say that the project is not on hold.

"They're going to be adding people in the work camp there as they move forward. And they're just continuing to be encouraged by what they see in terms of the opportunity in the mid- and the long-term of the potash industry," Wall said after talking to senior BHP officials on Wednesday.

The company said in June 2011 that it had drilled more than 55,000 metres of wells to complete 89 freeze holes and monitoring wells required for the production and service shafts. Kloppers said Wednesday that crews are working on sinking the shaft.

Word that final approval would be delayed came after BHP announced that its annual profit plunged more than a third because a slowdown in global economic growth led to weaker prices for its key commodities. The Melbourne-based company said net profit for the 12 months ended June 30 was $15.4 billion -- down 34.8 per cent from $23.6 billion in the same period a year ago.

BHP also said it is delaying a plan for a massive $30-billion expansion of its Olympic Dam uranium and copper mine in southern Australia.

Production at Jansen was expected to start production in 2015. The project is designed to ultimately produce approximately eight million tonnes a year of agricultural grade potash over an estimated 70-year life.

BHP has signalled it has big dreams for Saskatchewan.

The company said last September that, in addition to Jansen, it is exploring two other properties in the province near Melville and Young. In 2010, BHP failed in a $40-billion bid to buy Saskatoon-based PotashCorp (TSX:POT), the world's biggest fertilizer producer and one of Canada's best-known companies.

The delay is the latest disappointment for Saskatchewan's potash industry.

Brazilian mining giant Vale SA said last week that it was postponing a $3-billion potash project in Kroneau, east of Regina. Vale said challenging economic times don't make the mine feasible right now. There is no firm timeline on when construction of the potash mine will begin, but it is still part of the company's "longer-term plans."

The Vale announcement came the same day that PotashCorp announced a month-long shutdown at its Lanigan mine. The inventory-related shutdown is to run from Sept. 15 to Oct. 13, PotashCorp said on its website.

The ongoing drought ravaging the U.S. Midwest this summer has raised questions about future demand for fertilizer.

Wall didn't seem fazed about the impact the moves may have on the province, which has relied heavily on royalties collected from potash production to boost its coffers and keep the budget in the black.

"We're not immune from what's going on in the world, certainly, and we never will be," he said.

"Again, though, the fundamentals I think are strong because the fastest-growing economies in the world want two things. Chief above all else perhaps, they want food security and energy security.

"That's our business. That's what we have going for us."